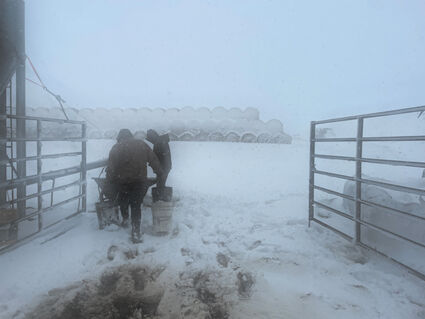 The combination of snow and high winds from the historic April snowstorms, have made things caused by drifts that made things difficult for livestock and ranchers, burying livestock, causing newborn animals to freeze to death, and making it difficult to get to the barn to feed animals.

Thanks to advanced warnings, many ranchers were able to get their livestock into enclosed areas, protecting them from snow drifts, but several ranchers did not have big enough facilities to house the livestock.

McKenzie County's Agricultural and Natural Resource Agent Devan Leo, said one of the biggest challenges for ranchers was just getting to their livestock. Whether it was inside or outside, the distance and high snow drifts between the animals and the rancher is what makes it hard to access the animals.

"You could be prepared all you want, but once your animals are locked inside of a building or corrals and snow gets as deep as it did, the hardest part is getting between your living space and the space you had the animals in." She said, "There is a point where your life becomes more valuable than the animal's life, so you have to make that deciding factor. At what point do you stop trying to get to the cows?"

Some ranchers in the county even slept in their tractors because they were unable to get back to their house and some producers whose cows were brushed up in tree lines spent four to five days digging to the cows to get them fed.

"It doesn't matter if they lost 1 or 100 of their cows, it has been impactful in many different ways."

Leo explained that the most detrimental factor is the after-effects of the storm; extreme temperature fluctuations can cause respiratory issues in cattle.

The other challenge is the risk of disease; the stress from the storm is causing pneumonia and scours in the calves.

"That is where their main losses are coming from, not necessarily during the storm because everyone was pretty diligent during the storm. The stress after the fact is one of the hardest parts on our livestock," said Leo.

Some producers picked up the calves and brought them into shelter right after they were born, which means they didn't get a chance to suck colostrum from the cow. "So, they missed that first initial shot of immunity right there.

Although the storm had devastating effects on livestock, ranchers across the area are thankful for the precipitation.

People throughout the region are hoping the moisture created by the blizzard could be a turning point to move to a wetter cycle, but McKenzie County is still in a D3 drought status.

Unfortunately, all the snow does not equate to rain. "During the first storm over Easter weekend, we may have had 18-24 inches of snow across the county of snow, but that only equates to 1.5-2 inches of actual moisture," explained Leo. "The second storm event, was a lot more wet, but still we only received about 2-3 inches of moisture"

Altogether, the county only received 4-5 inches of actual moisture, considering the three feet of snow they received over the past two snow events. 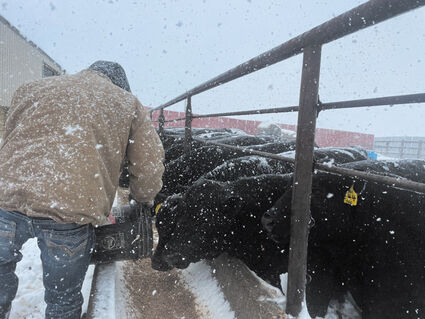 On top of this, the county has had zero growing degree-days since the week before Easter. "We need consecutive growing degree days to stimulate the grass again and we still have a lot of areas covered with snow." She said, "Producers will need to draw back to turn out their livestock; just because we see green does not mean we should turn out. People may be low on feed, but we need to really hold off if we want the grass to get us through the summer."

Although the exact loss of cattle will not be known until the snow melts, many ranchers have yet to get to all their cattle. "There are still some deep residual drifting areas, where producers know there are dead livestock under the drifts."

"Bottom line, it is too early to tell the impact the storms had on the drought; we will not know the true impact of the storm until all the snow melts."

NDSU extension is evaluating the storm's impact on the state's livestock industry. The information they collect will determine the need for assistance programs and areas with the greatest needs. For more information, producers are encouraged to contact their local extension agent.