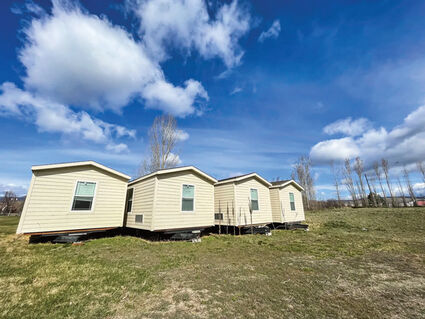 These homes brought from the Bakken oil fields will be placed on permanent foundations in Missoula. (Credit: Cameron Evans)

As home prices continue to climb to record highs in Missoula, community nonprofits are turning modular homes that were once intended for workers in the Bakken oil fields into permanently affordable housing for two lifelong area residents.

The modular homes will be available for two residents - a retired house painter and a working diesel mechanic - to purchase at a fifth of the cost of Missoula's median home price, said Heather Harp, Habitat for Humanity of Missoula executive director.

The project comes as home prices in Missoula continue to rise. The median home price in Missoula County has climbed to a new high of $510,000, according to a report released recently by the Missoula Organization of Realtors.

"This is a beautiful partnership because you've got two nonprofits that are working on an innovative solution," said Andrea Davis, Homeword executive director. "Is it only two homes? Yes, but every household that gets impacted is a win. And this is a model that can be used by other people and inspire other land sellers."

The homes will be placed on permanent foundations on land in East Missoula that a family sold at a discounted price to Habitat for Humanity. Homeword bought the modular homes from a surplus that was intended for workers in the once-booming Bakken oil fields of western North Dakota and northeastern Montana.

Habitat will use $190,000 from the Affordable Housing Trust Fund that the Missoula City Council unanimously approved spending to purchase the structures from Homeword and pay for costs associated with moving and repairing the homes.

After placing the homes on foundations and making any necessary repairs, Habitat will sell the homes to the new owners and hand over land stewardship to Trust Montana, a statewide community trust working to increase affordable properties for Montanans. Homeword will also help prepare the prospective homeowners by providing them with financial education.

Harp said the homes will be available for purchase by the prospective homeowners who make under 80% of the area median income. The area median income (AMI) is the midpoint of an area's income distribution, meaning half of the families in the area earn more than the median and half of the families earn less. Harp also said the mortgages for the homes will not exceed 30% of each household's income.

A Model For Success

The project is based on a model that has proven successful in the past. Several years ago, Homeword purchased 10 modular homes that originally were meant for oil workers and placed six of those homes on permanent foundations in what was called the Montana Street Homes project.

The six homes were sold to households earning 80% or less of the area median income, which was about $36,900 or less for one person or $56,300 or less for a family of four in 2018, according to the American Community Survey. The 450-square-foot, one-bedroom home sold for $98,000 and the 550-square-foot two-bedrooms sold for $120,000. The land under the homes is permanently owned by Trust Montana, and the home buyers lease it via renewable and inheritable 75-year agreements, according to Homeword's website.

Homeword is no longer affiliated with the project because the land was transferred to Trust Montana after Homeword developed the properties. But Davis said that, to her understanding, all of the original homeowners from 2018 have remained.

But Davis also noted that community land trusts are only one tool for helping create affordable housing for Missoulians and said that many other changes, such as more development and changes to zoning that allow for more town home development, are needed.

For their part, community land trusts are an effective way for Habitat for Humanity and its affiliates across the country to house more families, Harp said. The nonprofit will be able to place both the homes on the same lot because Missoula County's zoning regulations allow developers to increase density for the purpose of permanent affordability.

The use of modular homes will allow Habitat for Humanity to house the two residents in East Missoula in a quarter of the construction time it typically takes the organization to complete a project.

"Habitat is trying to pivot so that we can increase our production above and beyond two homes per year," Harp said. "In order to do that, it requires us to be innovative so we're looking at our construction methods."

Apart from the quick construction timeline, the use of modular homes also helps address a lack of homes for people who live alone.

"With this particular project, we got to do something we've never done before," Harp said. "We got to focus on the single people, and this is the first time in our history that we've been able to do that and it's in large part because these were already designed to be one bedrooms."

Davis said Homeword still has two modular homes that the organization is looking to place on land, and added that it would like to hear from anyone who might be interested in donating or selling land at a discount to nonprofits.

Harp also said Habitat for Humanity of Missoula will be holding a town hall meeting to educate the public about community land trusts on May 25.

"We need to inform and educate people about the work we do, and we also need to inspire people to be the change we need to see happen," Harp said. "Just like (those) who donated the lots to us a few years ago, we hope to inspire others to do the same."