Pooch Receives Above And Beyond For Fairview Award 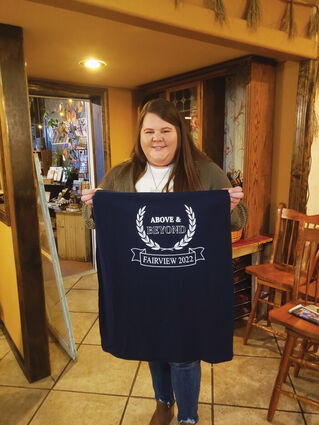 Vanessa Pooch shows her Above and Beyond For Fairview T-shirt. (Submitted photo)

Calling her "unprecedented in her activities for the Fairview Schools and highly motivated to help the community in any way possible," the members of Fairview's FFA nominated Vanessa Pooch for the Above and Beyond For Fairview award which was presented to her by Chamber member Kerry Finsaas at the recent FFA banquet.

The nomination letter stated that "there is one person who has done extensive work for the Fairview community, motivating the younger generation, promoting mental health and increasing our kids' self – worth, all while challenging our youth to fulfill their potential. The area Vanessa is most recognized for is her participation in the Fairview FFA program. She has taken time out of her life to coach, manage, and even counsel the Fairview youth. In her six years as advisor, she has grown the program to 24 students. This approximates 20% of the entire student population, an unprecedented level for any intracurricular activity. It's through her dedication and selfless service that the program has become recognized statewide as a leading chapter."

The nomination went on to say, "Outside the FFA program, she has become more than an advisor to the youth of Fairview. She has worked with students to understand the importance of setting achievable goals and work for those accomplishments. She has become such an influence on these youth that they will forever be touched by her leadership. Even after graduating, she stays in touch to counsel and assist the individuals as they learn to navigate the world beyond high school."

"She has taught the students the importance of community development and has worked with them to achieve community health. One example of such development is the "Thank a Farmer" program where the chapter would prepare and distribute meals during the sugar beet harvest. The Fairview FFA program also improves the community by construction of benches at Sundheim Park, helping to serve meals at MonDak Ag Days, and doing community cleanup days."

"As you can see, Vanessa Pooch is a strong pillar of this community that deserves the best we have to give her. One way to honor her is to present her with this prestigious award."

Pooch grew up on a farm near Farwell, MN helping her family raise corn and soybeans and operate a feedlot. After watching her older brother participate in FFA, she knew she wanted to be a part of it and started in 8th grade. She raised her own market steers and showed cattle in 4-H and FFA throughout high school. She remained a member through the second national convention as she attended college at South Dakota State, receiving the prestigious American FFA Degree, which is achieved by only 2% of members, at the first convention. She worked with South Dakota FFA and their state convention, mostly behind the scenes, coordinating contests and photographing events.

After receiving her degree in Agricultural Business, she got her first job as an agriculturalist at Sidney Sugars where she worked for eight years, completing nine beet harvests. Wanting to continue her involvement with FFA, she quickly reached out to the Sidney program about an alumni association, catching the attention of principal Dan Peters who contacted her to become the interim advisor after the departure of the Sidney Advision. "I was able to step in and keep the momentum going for the students for about four months," Pooch said.

Meanwhile, a group of Fairview students was pushing the school board to revive their FFA program, and some parents suggested that Pooch might be willing to fill the position. The first meeting with students was held in January 2017. "It was supposed to be an interim position. I'm still there," Pooch said with a smile. "FFA is near and dear to my heart. There's no compromise on having FFA or not."

The first year, there were only seven or eight members but that has grown to an active group of 24. "Any chapter has to have growing years and patience for the students to see what the program is all about," Pooch explained. "Now the students are showing the fun projects that their hard work has enabled them to do. We work hard and we play hard."

Sometimes the hard work doesn't seem very important, like putting an apple in hundreds of lunch bags, until the member sees a farmer tear up when he receives that bag as part of the Thank a Farmer activity. So many other service projects may seem the same until the member sees the benefit, and really enjoys the outcome. Pooch said it's really hard work from the beginning of the school year until the Montana FFA Ag Expo in November when the members participate in competitions where they rely on each other and trust each other to make it through. They have fun at the expo, which ends with a dance and just enjoy themselves.

As well as their many other service projects, FFA paired up with FCCLA in the Trash Dash through Recycle Montana. In two hours, the groups picked up 40 lbs. of trash plus a bunch of recyclables which were given to ROI. The effort won them a pizza party plus the prize for best PPE, fluorescent vests.

"Teaching young adults about being part of the community is important," Pooch emphasized. "It's the life blood. If we want a strong, healthy community we have to be willing to be a part of that."

Pooch enjoys seeing the progression in the students she is mentoring. They start out in middle school more as followers, and two or three years later are coming up with service projects of their own. The Thank a Farmer was a student idea, planting trees came from a member and the benches at Sundheim Park came through a student. "They see the need or lack and see an opportunity to fill that need. That's the growth," Pooch said proudly.

Congratulations Vanessa on receiving this award! You have definitely earned it.

Anyone wishing to nominate an individual or business for the Above and Beyond for Fairview award is encouraged to email [email protected] or mail the nomination to Fairview Chamber of Commerce, Box 374, Fairview, MT 59270. Awards are presented quarterly.