Tucker comes from a ranching family with lots of support from neighbors and friends. His sister, Mazie, rodeos at the high school level competing in goat tying and breakaway. His parents Ryan and Lacey have been instrumental in helping them both succeed in the sport.

Tucker hasn't always been a natural at goat tying. He had an unorthodox technique when he was younger. His mother, Lacey, called it a flying dismount. "It's funny that he won the goats cause he used to have such a wild get off," she said.

At the state finals, Tucker's winning time was wrapped up during his first run at the state rodeo. He was second to last in the go order. In the second round he was 6th and was in 3rd in the average going into the short round. At that point, he was ahead by 6 points. Tucker held on in the short round to secure 5th and enough points to be champion. "He laid down some solid runs," stated his mom, Lacey. 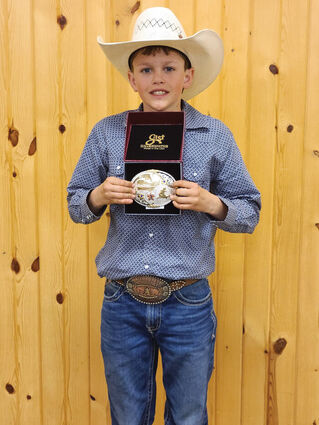 Tucker has been in the number one spot after the six rodeos held in the fall and maintained his position through the spring. He has shown a lot of improvement from his 5th place finish last year as a 6th grader.

It's taken a lot of hard work and practice for Tucker to get where he is today. He started rodeo in the 3rd grade. Since then he has been committed to working hard to improve. "I practice every day about. Like on the dummy and horse and stuff," he said. "I went to some clinics and had some other people that helped me too." Tucker has had help from Ty Tuff Clinician Kayla Spickelmier, Robert Sperry from Sperry Horses and Williams County NDSU extension agent Mindy Sigvaldsen.

All of this preparation and experience at the top of the standings in North Dakota has him confident to finish well at nationals.