Plant Society Get Together An Interesting Educational Opportunity 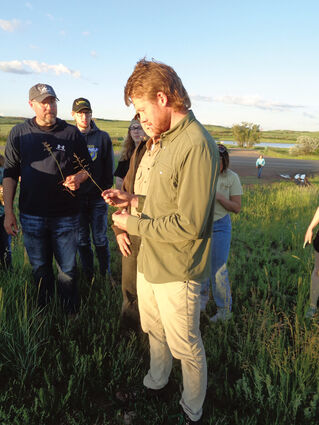 Between 20 and 30 members of Maka Flora Montana Native Plant Society eastern Montana chapter, plus friends, family, and people who were just interested in the walk attended the MNPS Plant Hike on the summer solstice. There is a lot of variety in the grasslands, even in the species of grass. Pictured front left is botanist Jake Powell and right is Maka Flora President Fraser Watson. (Photo by Jaymi Mozeak)

On the summer solstice, June 21, Maka Flora, the eastern Montana chapter of the Montana Native Plant Society had their second plant hike for June. It was a family-friendly get together of eastern Montana native plant enthusiasts in the great outdoors.

It started with a BBQ at 6 p.m. MT at Sather Lake. Fraser Watson, Maka Flora chapter president, mingled with his fellow members, their family, and friends. Between 20 and 30 different people showed from all across eastern Montana, as far as Sheridan WY, and even Canada. After some food and reconnecting, the group went on the plant hike. During the walk, they observed and documented the plant communities around Sather Lake in the little Missouri National Grasslands. They mostly used the iNaturalist citizen science app, inaturalist.org. Maka Flora tries to do a plant hike twice a month while the plants are alive and active. The first meeting for June was held at Medicine Rocks state park south of Baker and the next one is scheduled for July 16 at 10 a.m. in Medicine Lake. Frasier does not insist that those wishing to attend the chapter's plant hikes be members of the society. All they have to do is contact him by email at [email protected] and request to be put on the email list.

The Montana Native Plant Society is a volunteer non-profit organization chartered in 1987. Today, they have more than 800 members. According to their flyer, the goals of the Montana Native Plant Society are to preserve, conserve, and study the native plants and plant communities of Montana, as well as inform the public about the value of native flora. Membership is open to individuals, families, businesses, and organizations within and outside of Montana. Members can affiliate themselves with a local chapter, become an eastern, or western member-at-large. Those wishing to join can do so online at http://www.mtnativeplants.org. The plant society can also be found on Facebook and Instagram.