Hay that has been rained on will suffer dry matter losses, losses in energy content and tends to have a bleached color with a loss of soluble vitamin content. 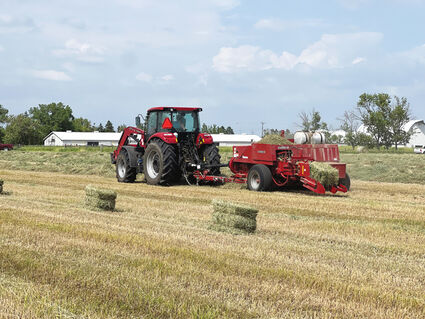 If hay remains wet for a period of time, or if moisture content is not down to the proper level prior to baling, heat damage can occur. (NDSU photo)

Weather conditions this spring and summer and much needed rainfall have lifted North Dakota out of drought conditions. Temperatures have been mild with a lot of cloudy and overcast days.

These conditions have been great for forage growth, but they have been less than ideal for hay drying and curing, says James Rogers, North Dakota State University (NDSU) Extension forage crop production specialist at the North Central Research Extension Center, Minot.

"Over the past few weeks, hay harvesting has begun with cereal rye and perennial cool season grass hay being harvested," says Rogers. "The first cutting of alfalfa also has begun."

In some parts of the state, rain has fallen on hay that was still curing in the field. Hay that has been rained on will suffer dry matter losses, losses in energy content and tends to have a bleached color with a loss of soluble vitamin content.

Dry matter losses tend to be higher in legume hay compared to grass hays due to the tendency of higher leaf shatter in legumes, says Rogers. Protein content will change little as a result of rain damage unless a large amount of leaves is lost.

An issue that can occur with rain-damaged hay is the possibility of mold development. If the hay remains wet for a period of time, or if moisture content is not down to the proper level prior to baling, heat damage can occur. Hay that has been rained on in the field will suffer losses in dry matter and nutrient content but can still be made into a quality product with a little extra handling, Rogers advises.

"Getting hay that was rained on dried down to the proper baling moisture as soon as possible is essential for salvaging the hay," says Rogers. "Leaving hay in a windrow where it was cut until it is completely dry can smother recovering plants underneath the windrow leading to weedy or thin strips across the field."

It is important to move or spread out the windrow to improve hay drying. Hay that was cut into a narrow swath then rained on needs to be spread out and fluffed back up to get air flowing through the windrow to stimulate drying. A hay tedder works well for this. If a rake will be used to roll wet hay over, make sure the ground where it will be moved is dry. If not, hay that is dry on top but rolled over to wet ground will wick moisture back into the dry sections.

Check moisture content of hay prior to baling. Hay with a lot of volume may appear dry on the outside but still have damp areas in the middle of a windrow, causing problems later after the bale has been made.

Finally, it is very important to test hays that have been rained on for nutrient content. Rain-damaged hay will have lower nutrient content compared to a hay harvested at the same maturity stage that has not been rain damaged.

"Rain-damaged hay can still be a good product," says Rogers. "It is important to know how good it is prior to feeding, and the only way to do that is with a hay test."