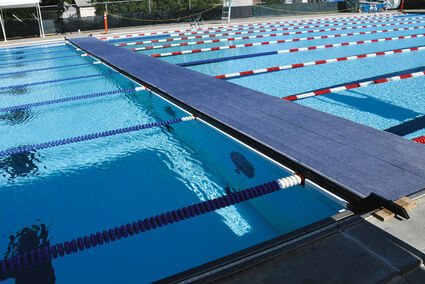 The dock is a partition in the middle of Svarre municipal pool that coverts the 50 m length to 25 m for Federation competition.

This summer, the Svarre Municipal pool will be full of swimmers of all ages, abilities, purposes, and desires. For the Tiger Sharks, Sidney's swim team, their ability to use the pool to host swim meets is in danger.

The Sidney Tiger Sharks is a 95-person swim team of kids aged 5-19. Of the 95, about 20 are part of the Shark Pups group that consists of the younger kids learning the strokes. The rest can compete in swim meets all summer long. The Tiger Sharks almost annually host swim meets, including multiple divisional and state meets at the Olympic size swimming pool. The problem is that, for their Federation, the Tiger Sharks need a 25-meter pool. Olympic-sized swimming pools are 50 meters long.

The Tiger Sharks currently use a 4-piece dock that needs a crane to be lifted into and out of the pool each time they host a meet. In the late '90s Sonny Anvik and a couple of the swim team dads got some materials donated by local businesses and made the current dock. It is well made and has been very sturdy but from the time it was constructed it was supposed to be a short-term temporary solution so the team could host meets. During their meets, the Tiger Sharks and their competitors must dive off and make their turns against this dock that spans the eight lanes of the pool.

Close to 25 years later, the temporary dock is getting old, and eventually, it will become a safety issue. It needs to be updated to current codes so Sidney can continue to host meets. The city of Sidney has been on the Tiger Shark committee to replace it for many years. It will not be easy, though. A few years ago, an effort was made to plan for it and they found the estimate to be $100,000. Interstate Engineering is working on the design, but a fabricator has not been found. The Tiger Sharks have been raising money for the new dock in one way or another since the original dock was made. They currently have $75,000 - $80,000 saved but there is still more needed. This summer, the Tiger Shark members have been selling tickets since June 1 for a chance to win a 2022 Sportsman 450 H.C., Green Mountain Ledge Grill, and $250 cash. The drawing will be held on Aug. 3, a few days before the state meet in Lewistown, where they will be defending their state championship title.

Those wishing to purchase tickets for the drawing can purchase them from any of the Tiger Sharks or their official Facebook page, "Sidney Tiger Sharks – Sidney, MT". Tickets are one for $20 or six for $100.