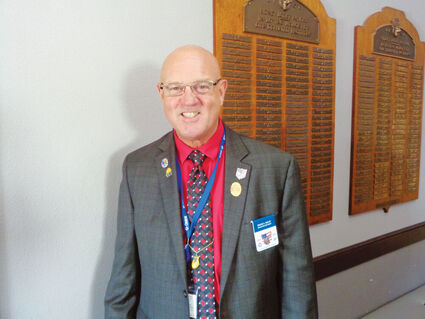 Bruce A. Hidley is the new Grand Exalted Ruler for the Benevolent and Protective Order of Elks. He started his tour of Elks State Conventions in Sidney. (Photo by Jaymi Mozeak)

July 14-16 the Sidney Elks Lodge 1736 was given the honor to host the Montana Elks State Summer Convention. Among the many local, state, and national speakers they were honored to have the newly elected Grand Exalted Ruler of the Benevolent and Protective Order of Elks. Bruce A. Hidley who was newly elected at the national convention in Atlanta, GA, July 4-6. New Grand Exalted Rulers are to travel to all 50 states. Montana is always the first stop. He said he is to promote elkdom throughout the entire country. While in Sidney he spoke of the good work the Elks do and Montana's projects that have donated $35k to volunteer fire departments. Raising money for the fire departments is not the only thing the Elks do. The Elks National Foundation is second only to the federal government in donating to student scholarships; $25k was donated by the Elks Disaster Relief Fund for the June Western Montana floods. In the schools, they have a Hoop Shoot program in September and a drug awareness program. Hidley said, "If we can help one student that's a big win."

He and his wife call Watervliet NY, north of Albany, home. Public service has always been in his life. His father and uncle were social members of their Elks local lodge and were very active. Neither of them ascended to leadership. Hidley started his public service career in 1980 and was elected in 2013 as Albany County Clerk and is currently serving his third term. "I've never been to Montana before and it's been great so far." he said. He has been a member of the Elks for 42 years. In 1992, he was made Exalted Ruler of his local Elks Lodge. He says it is thanks to his two sponsors at area 1 that he is where he is today.