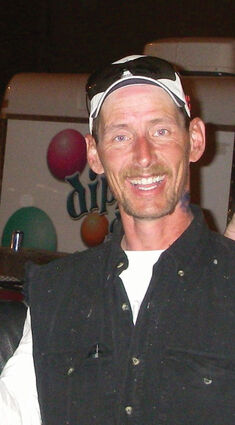 Randy Ray Klasna, Lake Havasu City, AZ formerly of Fairview, MT, passed away Saturday, June 25, 2022, at his home with his family at his side following a long battle with cancer.

Randy was born Sept. 7, 1968, Sidney, MT to Ernest and Carol Klasna. He attended grade school in Sidney, then graduated from high school in Lewistown, MT after the family moved there in 1982.

Randy was born to be a truck driver and he spent the majority of his life driving down the road in a semi, where he always said he was the happiest. He had many different jobs along the way, allowing him to meet a lot of interesting people and have some incredible adventures. Growing up on the family farm, Randy could be found "riding" with his Dad in a truck, tractor or combine. A lot of the time, riding meant sleeping, but he always wanted to be there. If he wasn't in the truck, he was drawing pictures of trucks.

He was a talented artist whose subject matter almost always had 18 wheels. Randy was an over-the-road truck driver for years. Then, he returned to Lewistown and Moore, MT, where he started his own trucking company, hauling fuel to local gas stations. When the most recent oil boom took off, Randy moved to Fairview, and drove trucks in the oil patch. He had a few different jobs until he went to work for Mark and Sheila Neu, who he said were the best bosses' he ever had.

Even when Randy was on vacation and having fun it usually involved wheels or some form of transportation. He loved off-roading in his Jeep, riding snowmobiles, boating on the lake or riding one of his Harleys. He went on a motorcycle run to Laughlin, NV, for several years and loved the weather so much he moved to nearby Lake Havasu City, AZ, where his family came to visit and ended up staying. Randy had a lot of friends from all over but there was always one constant for him, his best friend Claudine. They have been friends for over 50 years. For the last 10 years, Randy has been helping Claudine and her husband Clay on their farm in Lambert, MT. This was perfect for Randy. He spent the winters in Arizona, playing in the desert and summers in Montana back in a truck hauling grain.

Randy was a great guy who will be deeply missed. One of the things that will be missed the most is his storytelling. Randy loved to share his many adventures with anyone who wanted to listen. The tales got better the more he told them as more "facts came to light" with each retelling. He had a great sense of humor and it really came through when he had an audience.