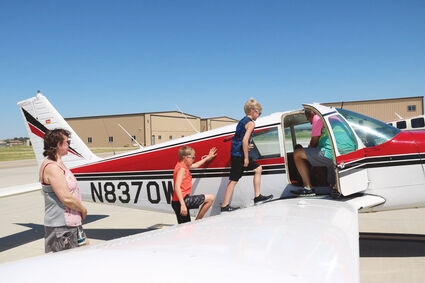 Families tour a plane during the event. (Photo by Kathy Taylor)

The new extended runway measures 6,550-feet long by 75-feet wide and allows the airport the ability to welcome bigger airplanes to the area.

The old runway, measuring 4,400-feet long by 60 feet wide, has long awaited renovations. The area has been wanting to extend the runway for the past ten years.

"When we started looking at what we were going to do with the runway, the oil boom was in full swing and there were a lot of airplanes that wanted to come but couldn't because the runway wasn't long enough," said Luke Taylor, Watford City Municipal Airport manager.

There were several reasons as to why the airport needed a new runway. "The old one was in poor condition and needed a major reconstruction to maintain it. We also were in jeopardy of losing 500 feet of runway because of penetration of the Runway Protection Zone," said Taylor. 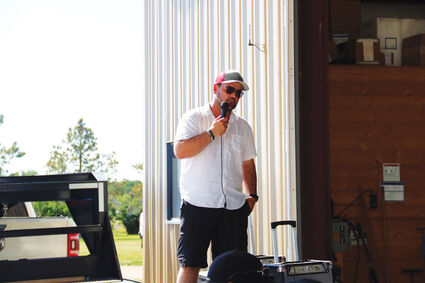 During the renovation, 200 acres of land was disturbed, 800,000 cubic yards of dirt was moved, 18 acres of concrete was poured (equivalent to 74 miles of sidewalk), and over 22 miles of electrical cable was installed.

The total cost for the project was around $30 million for the entire project planning through closeout ($17 million federal, $6 million state, and $7 million local).

Now with the longer runway, the airport can accommodate larger airplanes for a multitude of purposes including crop dusting, pilot training, and flying in personnel from oil and gas companies.

"I am really happy about the ability to get larger airplanes in and out and the safety aspect of having the parallel taxiway."

For more information on the Watford City Municipal Airport, visit their website at http://www.wcairport.net.