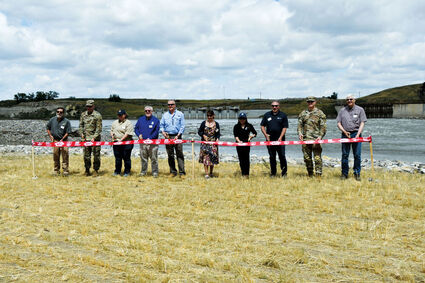 A Lower Yellowstone Ribbon Cutting Ceremony was held July 26 at Joe's Island on the south side of Yellowstone River, across from the Intake Fish Screens.

"The Corps of Engineers is a joint lead agency as was directed by Congress in 2007 for the Intake Dam Modification Project.as was Sec. 3109 of the Water Resource Development Act of 2007. The act authorized the Corp to use funding from the Missouri River Recovery Program.

It was also the 120th anniversary of the Bureau of Reclamation," states Eckert-Uptmor.

As one of the Reclamation's first five original projects, the Lower Yellowstone Project was authorized in 1904 as a single purpose irritation project. The Project irrigates about 58,000 acres on more than 400 farms in Eastern Montana and Western North Dakota, In addition to recognizing the completion of the bypass channel, Reclamation is also celebrating 12 years of dedicated service to the American people and managing water in the West.

The Project is operated and maintained by the Lower Yellowstone Irrigation District Board of Control under contract with Reclamation.

Since the pallid sturgeon was listed as endangered in 1990, Reclamation has partnered with Montana Fish, Wildlife & Parks, the U.S. Fish and Wildlife Service and the U.S. Army Corps of Engineers to determine Project effects on the species.

In 2013, due to significant design concerns with the rock ramp, Reclamation and USACE conducted a replanning effort to examine new and previously considered fish passage alternatives.

Following this effort, Reclamation and the USACE identified a bypass channel for detailed analysis. A Supplemental Environmental Assessment and Finding of No Significant Impact selecting the bypass channel for implementation were completed in April 2015.

In 2016, USACE and Reclamation completed the Lower Yellowstone Intake Diversion Dam Fish Passage Project Environmental Impact Statement and Record of Decision. In the Record of Decision USACE and Reclamation selected the Bypass Channel Alternative for implementation. The Bypass Channel Alternative includes the construction of an 11,150 ft. long bypass channel for pallid sturgeon fish passage, a replacement weir structure for water deliveries to the Lower Yellowstone Project and an Adaptive Management and Monitoring Plan. 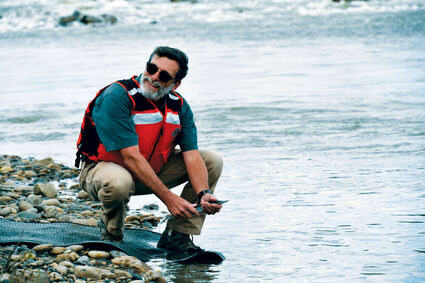 To end the ceremony local dignitaries joined in by releasing 10 juvenile, one-year-old pallid sturgeon into the Yellowstone River.