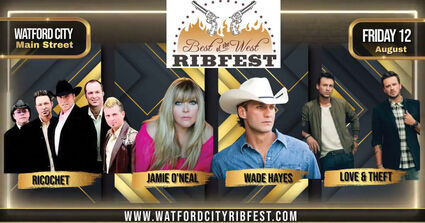 Watford City's Best of the West Ribfest and Street Fair is scheduled to start at 10 a.m. on Friday, Aug. 12. The event will feature tons of music, ribs, vendors, a classic car and truck show on main street, games for the kids, cornhole, and much more.

There will be a Bags and Bones Cornhole Tournament Starting at 11 a.m. followed by the Class Car and Truck Show from 12-7 p.m. There will be a kid's zone with jump and fun inflatable games for children 0-12 years of age from 12-8 p.m. At 6 p.m. ribs will be served to the public and the Best of the West Classic Car and Truck Show awards and Best of the West Rib awards will be announced at 7:30 p.m.

Music will start at 4 p.m. with The Country Fried Tour on the main stage followed by the 'Party After Dark'.

Several country bands from the 90s and 2000s including Ricochet Band, Wade Hayes, and Jamie O'Neal will be performing at the event. The 'Party After Dark' will feature grand finale singer of NBC's American Song Contest and North Dakota's own Chloe Fredericks and top ten country duo Love and Theft.

Love and Theft is an American country music duo consisting of vocalists Eric Gunderson and Stephen Barker Liles. Known for their songs "Angel Eyes" and "Night That You'll Never Forget," which reached a peak of #34 on the Billboard Country Airplay charts in Oct. 2014.

Everyone is encouraged to enjoy all the music, food, and fun the event has to offer. For more information on the Ribfest, check out their Facebook page: Best of the West Ribfest and Street Fair.