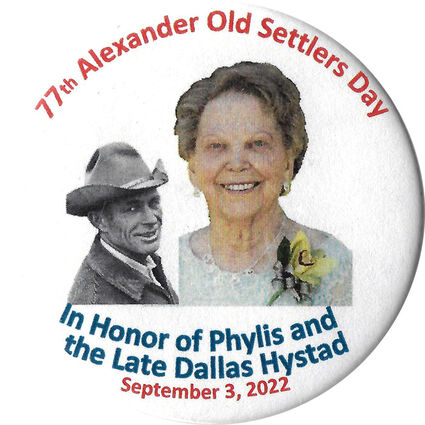 Dallas was born on Nov. 14, 1919 to Henry and Emma Pagel Hystad at their home in the Farland community. He graduated from Watford City High School and attended North Dakota State School of Science in Wahpeton. After serving in the Army Air Force for over 3 years in World War II, he came back home and purchased his farm/ranch in 1947.

Phylis was born on July 14, 1928 to Harold and Elsie Gessner Lynner in Watford City. She was second born of 5 siblings. She attended grade school at the Braaten and Roalsvig schools south of Arnegard and graduated from Arnegard High School in 1946. She received a Teacher Certificate from Minot State and taught rural schools for 4 years.

Phylis and Dallas were married on June 20, 1948 at the Zoar Church south of Arnegard. They moved to his farm/ranch north of Arnegard where Dallas resided until death and Phylis resided until 2015 when she moved to Williston. On the farm/ranch, they raised Simmental cattle, quarter horses, small grains and hay. In 1964, Phylis started working for the ND Statistical Reporting Service and worked for them for 23 years. She was the first woman in North Dakota to work for them. She also compiled a book called "The Final Resting Place". It is a complete record of all the cemeteries in McKenzie County. She also worked to get markers on the unmarked graves.

Phylis has been active in the VFW Auxiliary, McKenzie County Historical Society and the Women of the Moose. She enjoys cooking, baking, entertaining, crafts, quilting, genealogy, and traveling in the U.S., Norway and Europe. Through the years, she was active as a 4-H leader and helped many youth with their projects, including her grandchildren.

Dallas was one of the founders of the North Dakota Simmental Cattle Association.

They both especially liked spending time with their grandchildren.

Five sons were born to them: Roger, Darrell, Calvin, Craig and Lloyd.

Darrell and Debbie live in Glendive MT. He has worked in the oilfield for over 40 years and now is retired. They have 2 daughters: Darcie and Trevor Waarvik and their 3 sons live in Glasgow; Darla and Randy Ostrum live in Rhinelander, WI and have 1 son.

Calvin is deceased. He had 2 sons: Shawn and Michaela live near Great Falls, MT, and they have 2 daughters; Cameron and Kim live in Helotes, TX, and they have 3 children.

Craig and Lona live on a farm near Arnegard. Craig ranches and is now retired from the oilfield. Their children are : Cassie and Darel Haak and their 3 children of Arnegard, Casey and Wendy live in Buchanan, ND, with their 5 children, Caydee lives in Williston with her daughter, and Charlie and Mason and their son live in Williston.

Phylis lives in Williston. She keeps herself busy being active in the Light of Christ Church, quilting, going through stuff in her apartment, visiting and spending time with family.