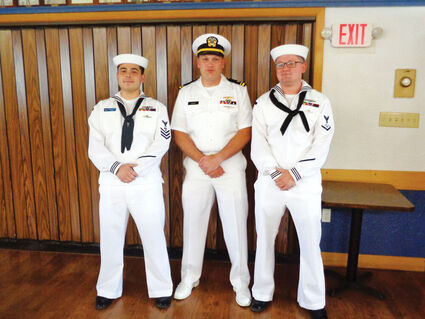 Pictured from left, MMN1 Matthew Campolattara, LTJG Thomas R. Harvey, and STS3 Charles Roberts are serving on the new USS Montana. They spent Friday, Aug. 26, in Sidney and attended a dinner and reception in their honor at the Sidney VFW while seeing eastern Montana. (Photo by Jaymi Mozeak)

At the end of June, the U.S. Navy added another high-tech nuclear-powered fast attack submarine and christened it the USS Montana. Three of its crew members were given the opportunity to visit eastern Montana.

The three sailors came from different parts of the country. Navy Lieutenant Junior Grade or LTJG Thomas R. Harvey grew up in Utah. He had joined the Navy because of his sense of duty, desire to serve our Country, and because he felt it would make a good career for him. Now he is head of the supply department because he felt the job offered a lot of opportunities. Machinist's Mate, Nuclear Power, or MMN1 Matthew Campolattara, is from Illinois. Originally, he had wanted to join the military but felt drawn to the Navy. He supervises the operations of the mechanical systems in the onboard nuclear plant and was chosen for his aptitude in nuclear operations. Sonar Technician (submarine) Petty Officer 3rd Class or STS3 Charles Roberts grew up in South Carolina. He went to college for mechanical engineering but found a future in the Navy to be more appealing. He signed up for Submarine Electrical Computations but was picked to be a sonar technician. 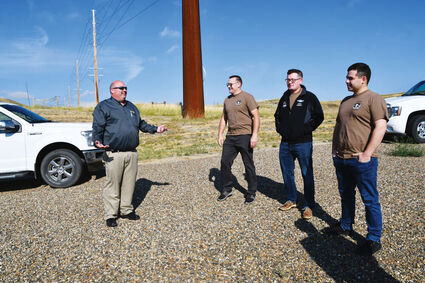 While their submarine is on the east coast getting upgrades and more testing MMN1 Campolattara, LTJG Harvey, and STS3 Roberts were given the opportunity to see eastern Montana, meet its people, learn a little of its Native peoples, culture, history, and economy from Aug. 24-29. They flew into Williston on Aug. 24 and were picked up by USS Montana Committee Volunteer, Bill Henderson and taken to Miles City. They spent the night, visited the sights, and even went to the Eastern Montana Fair and Rodeo, on Aug. 25. During the fair, they got to look around at the exhibits and mingle with some of the locals. Aug. 26-27 they moved their tour to Sidney. In Sidney, they were able to visit one of the local cattle ranches, a local farm, some of the local oil operations, attend a reception and dinner in their honor, and visit the Lower Yellowstone Rural Electric Cooperative's substation. They also visited Fort Kipp for their PowWow and Fort Peck Historic Theater for a showing of "Wait Until Dark", on August 27. On Aug. 28, they toured the Fort Peck Dam and Reservoir, interpretive center and museum, and the dam powerhouse.