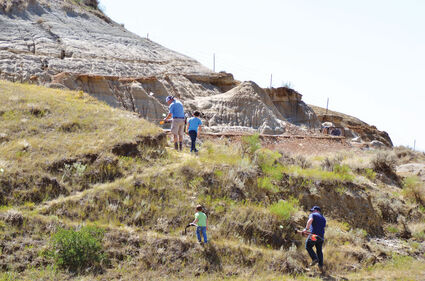 Despite the hot weather, archers were out to practice and enjoy the day. (Photo by Nancy Hedegaard)

In addition to the 22 targets that are left up all year long, 24 life-size animal targets are set up at various distances and elevations for the 3-D shoot.

"The targets are set up in realistic positions and it's a great way to practice for the upcoming archery hunting season," said Tom Hedegaard, Lone Tree Archers president.

The event is put on by the organization's nine board members, including setting up targets and divvying out shifts over the two-day happening. It takes place at the club's archery range eight miles east of Sidney and is the main fundraiser for the Lone Tree Archers.

"Along with membership fees, the 3-D shoot helps to fund our land lease, insurance, target purchases, and operating expenses," Hedegaard explained. "It can be expensive to maintain the range and targets, and we need community involvement."

Participants could run the course as many times as they wanted in the day during the 3-D Shoot, and while it was just for fun and practice, there were a couple 'novelty shots' that awarded winners cash and an arrow quiver. 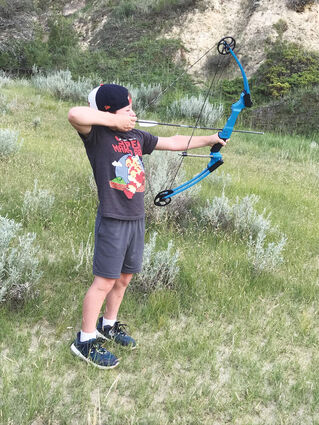 Ethan Hedegaard gets ready to take a shot over the two day archery event. (Photo by Nancy Hedegaard)

"His love of archery continued throughout his lifetime and over the years he received many honors for his dedication. In 1979 he received the Montana Bowhunters Association award for Bowhunter of the Year. He was also inducted into Montana Hunting Hall of Fame in 1995 with a Lifetime Achievement Award in bowhunting," Hedegaard remarked.

Membership in the club is paid annually; individual membership is $35 and a family membership is $50. The 40-acre archery range is open to members during daylight hours and the facilities include a clubhouse, a handicap accessible outdoor restroom, and parking area. Each week during the summer members are invited to Club Nights where they can get together to target shoot and barbeque.