Operation Round Up: Electric Companies Giving Back 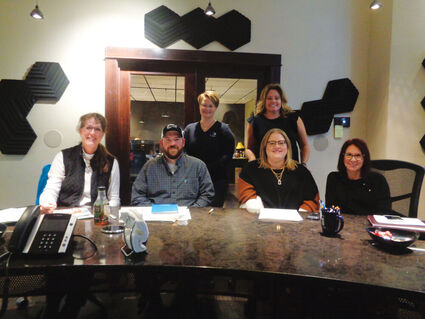 Back from left, MonDak area Operation Round Up members Wendy Johnson and Jessica Berwick; front, Ann Bouchard, Dylan Klasna, Mary Hagler, Angie Olson, and, not pictured Jen Boyer made the decision to award the third quarter Operation Round Up funds gathered by LYREC to an area organization. (Photo by Jaymi Mozeak)

The seven members of the LYREC Operation Roundup Board had a very important decision to make, Thursday, Sept. 22. The board members met in the LYREC board room as they do every quarter to decide who to award the funds accumulated by the Lower Yellowstone Rural Electric Trust.

Operation Round Up is a program originally founded in 1989 by Palmetto Electric in Hilton Head Island, SC. It has since been adopted by many energy cooperatives across the country. When the program is in effect customers may round off their electric bill to the next dollar with the difference going to a fund set up by the program board. The most any member donates per year is $11.88, but on average, it is $6 a year. LYREC has been doing it since 2017. Operation Round Up funds are not given to individuals or families. Instead, the funds are awarded to non-profit and community organizations in the general service area of LYREC. They must apply for Operation Round Up funds by contacting the LYREC office in Sidney or they can download an application on http://www.lyrec.coop. Funds are disbursed to the awarded organization in the general service area of LYREC for charitable, education, scientific, health, or safety purposes. No funds of the trust are in any fashion to be used to support any candidate for political office or any political purpose. No more than $2,500 will be given to any one group, organization, charity, or like organization per year.