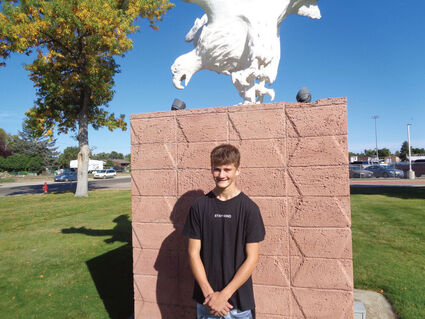 Sidney High School freshman, Carter Heggem, is already an award-winning Cross-Country star and is starting his high school years off right by breaking the school record for the 5K within the first two months of school. (Photo by Jaymi Mozeak)

Saturday, Sept. 24, Sidney Eagle High school sports history was made. It is something that will be aspired to for years to come.

During a meet at the Culbertson track, Carter Heggem broke the Sidney High School record for the 5K in Cross Country. He completed the race in a whopping 16 minutes and 43 seconds. It was quite an accomplishment as not only did he break the 17-minute, 18-second record, but he beat all his competitors and took first place. Heggem is only a freshman this year, but he's been in Cross Country since fourth grade. Last year, in eighth grade, he took first place in the 5K at every meet except Dickinson.

Heggem loves to run. He wants to continue in Cross Country in college after he graduates with a full scholarship for his achievements. He has not decided on a major, yet, but knows he wants to go to either Oregon, Iowa, or North Carolina State University. Heggem's father participated in Cross Country when he was in high school and did pretty well. Heggem had been curious about Cross Country when he was finishing third grade. He wanted to try it out and his father helped him get into it.

Cross country is a school sport in the Sidney Public School System. Kids can try different track events at the end of first grade but sign-ups for Cross Country for grades 6-12, begin in August, just before school starts. Elementary grades, 4 and 5, cross country sign-ups are in September.