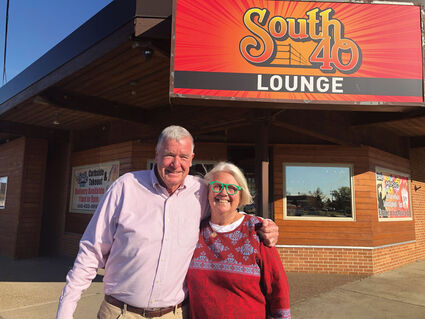 U.S. House of Representative Candidate Gary Buchanan and his wife, Norma, came to Sidney Wednesday, Nov. 9 to meet with local and county officials on the needs of the area. Buchanan is an independent candidate.

Gary and his wife, Norma Buchanan, Billings, made a brief visit to Sidney on Wednesday morning at the Sidney Chamber of Commerce.

The Buchanans were also treated to lunch with a meet and greet with other business people by the South 40 owners Arnie and Lola Hansen.

Buchanan is an independent candidate for U.S. House of Representatives for Montana in this year's mid-term election. He has resided in Montana for 47 years and is the owner of Buchanan Capital, Billings, since 2002.

Buchanan has always taken an interest in what Montana has to offer and been involved on the state and local levels to protect and promote Montana values and assets.

At the age of 31, under Gov. Ted Swinden, he was the first Department of Commerce director and went to Taiwan and Japan for the Montana Wheat Commission and was involved with selling cattle 42 years ago. He was also involved with setting up the Montana Tourism Department. Working with six different governors he served on a multitude of different boards in the state.