Back in 1992, local pastor Alton Hillesland, formerly of Watford City and now in Sidney, was passing by a collection of antique farm equipment north of Watford City owned by a fellow Lions Club member, Arne Holms. "Arne had been complaining to me that he was tired of moving the machinery every time he had to mow," said Hillesland. "So as I was passing Ras Rolfson's office (another Lions' club member) I stopped to see if there was something we could do to help Arne."

The idea was brought up to the Lions Club and a board of directors consisting of fellow club members Ray Stenberg, Ras Rolfson, Clyde Holman, Don Erikson and Alton Hillesland, were elected to form the Heritage Park.

Members began gathering various equipment and several buildings from the early homestead days. In addition they put up flagpoles for flags representing nationalities in the area and a steel building for storage.

The park was officially dedicated and a grand opening was held Sept. 15, 1995. 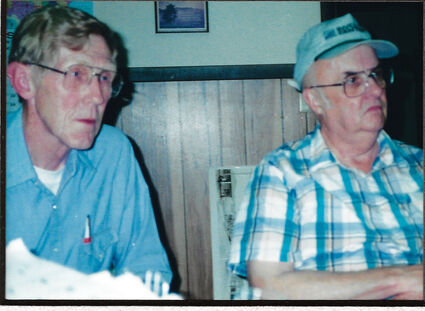 Hillesland is the only original Heritage Park board member left and has received a life-time membership to the Park for his dedication to the board from 1992-1996.