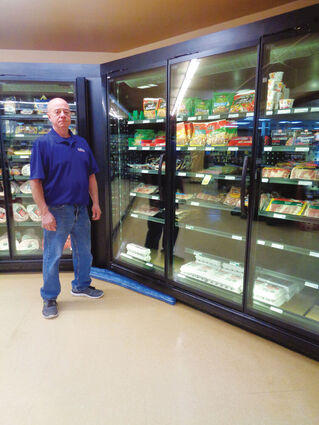 ESM2: Dairy Manager, Sam Simard, stands in front of the egg case at The Market, Sidney the day of their extra egg delivery. He said, "They'll be gone by tomorrow." (Photo by Jaymi Mozeak)

Friday, Nov.11, a mother from Bainville went to Walmart in Williston looking for eggs for her holiday baking and there were none, not even the expensive, organic brands. Monday, Nov. 14, she drove to Sidney with the same result at the grocery store. There just were no eggs. 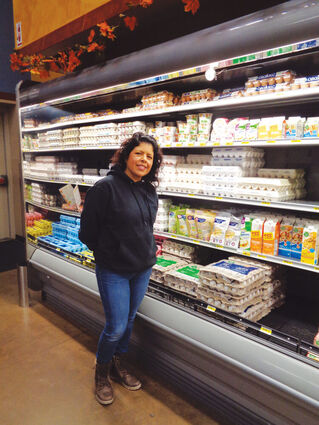 Dairy Manager, Carolina Sanchez, in front of the egg case at Reynolds, Sidney their regular freight day. She says, "We have to restock three to four times a day." (Photo by Jaymi Mozeak)

The reason is simple, supply and demand. As Sam Simard, The Market Dairy Manager, Sidney, stood in front of a partially empty egg case, on Nov. 17, the day of his most recent egg delivery he said, "Demand is up, supply is down, and the price is high. The eggs I got this morning will all be gone by tomorrow. As soon as the word gets out." Carolina Sanchez, Reynolds Market Dairy Manager, Sidney, stood in front of their recently filled egg case, on Nov. 18, and said, "We are having to stock three to four times a day. I use several different distributors, but they have limits on how much can be purchased by stores at a time." Both agreed the biggest cause is Avian Flu. In January 2022, HPAI was found in wild birds, and in Feb., it was found in domestic poultry. Simard said, "Millions of laying hens had to be killed." Marley Manoukian of Richland County's MSU Extension agent agrees. She said, "It is spread by wild birds. It was first found in Montana flocks in April 2022 and North Dakota in the summer." According to the CDC's website, http://www.cdc.gov, as of Nov. 18, 46 different states have had HPAI cases in poultry in the US but, according to http://www.liv.mt.gov, as of Nov. 18, there have been no cases of HPAI in Montana east of Billings, no wild cases in Richland County, and no cases in poultry west of Tioga, ND.

That mother from Bainville eventually did find eggs for her family but it was tough and she paid way more for them than she would have just a year ago. Grocery stores in the MonDak and across the nation are doing their best to offer eggs for their customers. Many, including the two in Sidney, are getting egg shipments outside their usual freight days.

Chicken feed costs supply chain failure due to this administrations total lack of forethought to derail the feed shortage. Get that bumbling idiot out of the whitehouse asap