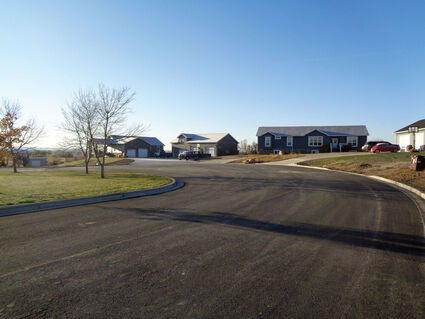 Earlier in the year residents of Sidney Circle Subdivision were finally given the last of some long overdue improvements to their water, sewer system, and streets. (Photo by Jaymi Mozeak)

Fall of 2022 Sidney Circle Subdivision was finally given some long-needed improvements.

The Sidney Subdivision was started in 1978. More people started moving in during the oil boom in 1979 and 1980. In the late 1980s they reached saturation. They put a municipal system in but by 2018 it was reaching capacity. According to Interstate Engineering's website, http://www.interstateeng.com, "the original drain fields, wells, and adjunct water and sewer mains installed during the subdivisions' inception were never fully installed to handle the capacity of the growing subdivisions they were intended to serve." Signs were all around. The water stunk and was unsuitable for human consumption plus the sewers were backing up often. After putting up with it for a time, the Sidney Circle Housing Association asked the county for help.

According to Mandi Nay, coordinator for the Dry-Redwater Regional Water Authority, there were 2 DRWA projects completed in the Sidney Circle subdivision area to provide both water and wastewater. The projects were made possible with partnerships between the State of Montana (DNRC), Richland County, the City of Sidney, and DRWA. The first project went live in 2018. According to Interstate Engineering's website, http://www.interstateeng.com, full water main replacements were completed for Sidney Circle 1 & 2 and many other places located along County Road 348. The new extensions allowed rural residents on individual private wells the opportunity to connect to a reliable and quality water supply, eliminating the unknowns and maintenance headaches associated with well ownership. It connected 49 Sidney Circle Subdivision water users to DRWA's system. The second project went live in 2021 and connected 4 water users as well as 23 wastewater users. Additionally, with the completion of these two projects, we were successful in getting a Non-Development Agreement Release for another 48 lots in the area that has been in place since the 1980s. More of the streets were paved and the project was completed.

The Sidney Circle Water Sewer Improvements Project was DRWA's fourth construction campaign to bring quality water to rural residents in eastern Montana. According to their website, http://www.dryredwater.com, the goal of DRWA is to own and operate a water system to provide good quality household and livestock water to the owners and members of the coverage area.