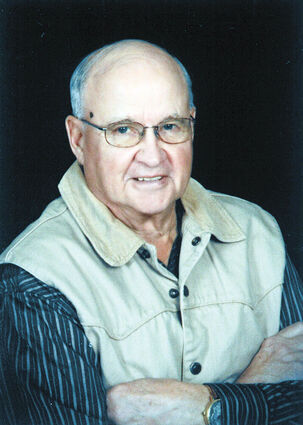 Funeral services for Genhard G. Kjos, 79, Fairview/Sidney, MT are at 10 a.m., Thursday, Jan.5, 2023, at Zion Lutheran Church, Fairview, MT with Pastor Tim O'Shields officiating. Interment with Military Honors will be in the Sidney Cemetery, Sidney, MT under the care of Fulkerson-Stevenson Funeral Home, Sidney. Visitation will be on Wednesday, Jan. 4, 2023, from 10 a.m.-5 p.m. at the funeral home in Sidney and one hour before services at the church. Remembrances, condolences, and pictures may be shared with the family at http://www.fulkersons.com.

Genhard Gene Kjos was born on November 4, 1943, in Williston, ND to parents Oswald Jennings and Elva (Johnson) Kjos. He grew up on a farm northwest of Williston. The family belonged to St. Paul Lutheran Church NW of Williston where he remembered being baptized on September 4, 1949 and also being confirmed there.

He attended Mortenson and Johnson Country Schools through junior high. After completing his first year of high school at Dakota Lutheran Academy, Minot, ND, he transferred to Williston High School, graduating in 1961. He volunteered for the draft, serving two years active, two years inactive and two years stand-by in the U.S. Army. He attended summer camp three years at Camp Ripley, MN before being honorably discharged in 1967. Following his active-duty discharge, he worked with his father drilling water wells. He was employed by Borsheim's in Williston for a short time before attending Hanson Trade School, Fargo, ND, graduating in 1965. He returned to Williston and worked as a welder at Modern Machine Works for five years.

On September 22, 1968, he was united in marriage to Sylvia Borg at Zion Lutheran Church, Fairview, MT. They lived and worked in Williston. Michael Gene joined the family in 1969. In 1970, they moved to the Borg farm northwest of Fairview to start farming and another son, Ronald Leif was born. Genhard enjoyed farm life, especially working with his cows. He drove school bus and was a relief pumper in the oilfield while he was farming. He was a kind, giving, hard-working person who was always willing to help friends and neighbors. Genhard was known for his smile and chuckle, especially when he was visiting and reminiscing about the past. He farmed until 2008 but continued to ranch until 2018 when they moved to Sidney, MT.

Genhard died peacefully with his wife by his side on December 27, 2022 at the Sidney Health Center.

He was preceded in death by: His parents, Oswald and Elva Kjos; grandparents, Olaus and Jenny Kjos and Norman and Minnie Johnson; two brothers and sister-in-law, Norman and Floyd (Peggy) Kjos; nephew David Martel, and numerous aunts, uncles, and cousins.