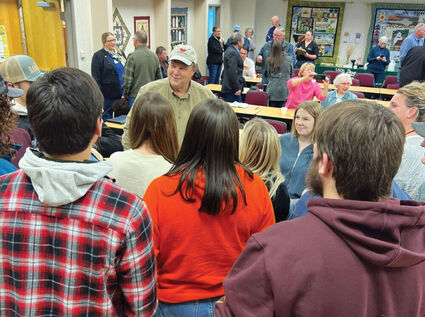 Senator Tester opened the meeting by stating, "We need a farm bill that works for us, and I want to hear from you."

He then recognized the Sidney high school FFA Chapter, led by teacher and advisor Kelly Alvstad, for attending the event. "Students, you get extra credit if you ask a question or make a comment". After listening to the session, he then asked the students how many of them plan to return to Montana in the field of agriculture. The room was in chills when 90% of them raised their hands. Tester asked to relay to the school board his thanks for allowing them to come, and he recognized the work of their teacher.

After the pledge of allegiance, Tester opened the session up for questions and comments. Whitney Klasna , Vice President of the Montana U.S. Cattlemen's Association, asked for livestock specific titles in the next farm bill, addressed the disaster specific programs, the emergency conservation program, and asked for flexibility in reporting, and deadline extensions.

Trevor Schock from the Montana Grain Growers Association addressed his concerns for crop insurance support (premiums have increased), and asked for increased support for the Market Access Program, which has not changed since 2006. He also asked to keep support programs voluntary.

Jim Steinbeisser, past President of the Montana Stock-growers Association asked for a program for reporting dead calves due to storms. He expressed that the sign-up period was too short for indemnity program. He expressed that a great addition to the farm bill was programs that protect smaller operations such as being able to hedge your livestock. It has a big role to play for smaller ranchers. He also discussed the danger in farmers managing for "programs" rather than for individual profit. He stated that the livestock vaccine bank is critical, and that additional funding is needed for grizzly bear control. He ended by discussing support for the Emergency Conservation Program.

Ty O'Connor asked for more support for our university programs. "Let's get our children back here, contributing to Montana society". He also expressed that we need more USDA meat inspectors in our state. "The problem is that starting pay is only $17 per hour, and we don't have a level playing field in the job market. I want Montana to have a new goal: to be the first state to have all Montana beef served in our school systems, universities, and reform systems. We need to get Montana raised beef into our grocery stores, restaurants and schools." He ended by requesting organic pricing, and continued support for our university research programs, especially on climate change.

Walt Schweitzer, Montana Farmers Union thanked Senator Tester for coming to hear what we need for the farm bill. "Our farm bill has been drafted by corporate America. It's about corporate control of our food dollar rather than about feeding America at a reasonable price. Government research funding was cut back in the 80's, so now it is mostly funded by corporate America. This is good for what corporate wants, not for maximum yields. Our goal is to maintain a sustainable yield. We need to have a focus on feeding ourselves, and research is how you get there. What do we do about this? We need to invest more in renewable fuels such as diesel, or ethanol using biofuel oil, because WE can grow that. This will result in lesser dependence on foreign oil and will increase our own food security. We need to be concerned over foreign ownership of land, and foreign ownership of processing plants. Currently the Brazilian cartel owns 50% of American meat processing plants." Schweitzer then went on to explain a possible solution was to create a competition so we can all share in food costs, and possibly avoid the selling of the family farm. "This competition may make it possible to gain access to supplying grocery shelves, having less involvement with foreign imports.

Senator Tester's closing statement of the session was directed to the high school students: "You are the future of agriculture".