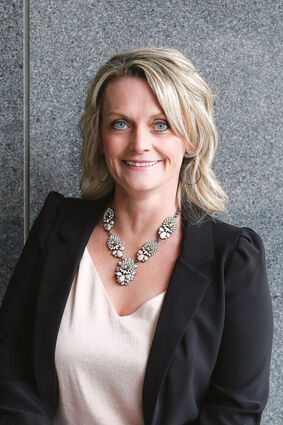 Joelle VanderLinden, one of the many speakers to speak about the issues affecting the grain industry. She will be speaking on the LoadPass Permit System. (Photo by Janell Pederson of Rebel Soul.)

Joelle VanderLinden will be one of the many speakers discussing issues affecting the grain industry at the 70th Annual National Hard Spring Wheat Show on Wednesday, Feb. 1. The Wheat Show will be held at the Grand Williston Hotel & Conference Center, 3601 2nd Ave. W., Williston.

VanderLinden will be speaking on the LoadPass Permits System. She is a North Dakota native who grew up in Watford City and attended Bismarck State College where she graduated with an associate in business degree. She is the owner of H & M TeamWorks Consulting Inc. and works for the Western Dakota Energy Association. She has been with them since 2013 and has been a permit operator for two years. According to her profile on http://www.ndsu.edu, VanderLinden and her staff conduct the day-to-day operations for the LoadPass Permits System on behalf of WDEA.

The LoadPass Permit System is the WDEA's system for the industry to acquire permits for overweight and oversized vehicles to use on participating county, township and city roads in North Dakota and information on restrictions and notifications on those roads. It makes the usual process for acquiring permits quicker and more uniform. According to Executive Director Geoff Simon, the Western Dakota Energy Association was formed under a joint powers agreement in November 1978 as the North Dakota Association of Oil & Gas Producing Counties. They first started using paper permits in 1984 and the system evolved from there. In 2015, they took their permits online and in 2016, because their membership had grown to include more than just counties and the areas represented included those that just mined coal as well, they changed their name to the Western Dakota Energy Association. In the first part of February 2023, the association is expected to expand to 31 different counties and three cities.

This is VanderLinden's first time speaking at the National Hard Spring Wheat Show. She said, "I'm looking forward to meeting new people and sharing with them about LoadPass." She will be speaking on LoadPass at 8:45 a.m.