“Read the Most from Coast to Coast”

The students that received the most points from each classroom received a Kodak FunSaver camera and a certificate from White Drug for free developing.

Students and teachers took a “Reading Road Trip” at West Side for “I Love to Read” month during February. Our theme this year was “Read the Most from Coast to Coast”. As we visited famous landmarks along the way, we tracked students’ reading progress by the number of AR points they earned this month.

Our students won prizes through weekly drawings by submitting tickets for each AR point earned. Each classroom also awarded prizes at the end of the month for the most AR points earned and most improved reader.

On Friday, March 1, we celebrated the end of our journey with a special picnic lunch. Students were encouraged to dress as wacky tourists that day with sunglasses, hats, and any other “touristy” clothing they might have at home.

Classroom prize winners were announced after lunch with a train whistle. They then collected prizes from their teachers. First place in each class for the Most Points Earned was a Kodak FunSaver camera and a certificate for free developing from White Drug. Parents Josh and Andrea Reed donated the cameras. The 2nd Most Points Earned and the Most Improved Reader also received special prizes. Each student in the school also won a “Take a Reading Road Trip” book bag and a certificate of achievement.

We also had a big prize for the one who earned the most points in the whole school for “I Love to Read” month. This year we had a tie! Gary Carpender and Alexis Ruonavaara, both 3rd graders, each earned 68 points. They each won a Vivitar digital camera and a 4 GB SanDisk card to store their pictures on. These were donated by Electricland.

Prizes were also given to the teachers who set a good example for their students by reading and taking AR quizzes, too. Margie’s Car Wash donated 4 free car washes as prizes.

We would like to thank all of our sponsors, parents and teachers for making a special effort to make this a memorable time for all our students. 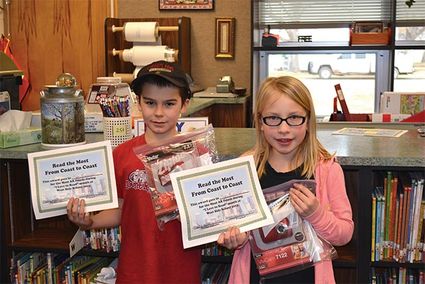 Gary Carpender and Alexi Ruonavaara received the most AR points for all of West Side School. They received a Vivitar digital camera and a 4GB SanDisk card to store their pictures on.

Most Points for ALL of West Side

A tie with 68 points each for February: