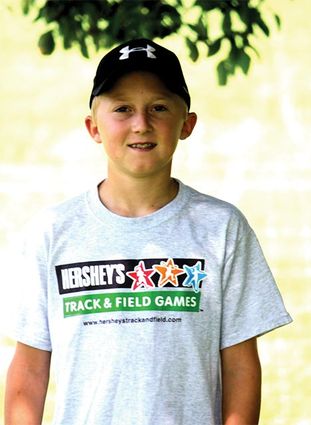 Fairview native Brady Buxbaum, 10, son of Brian and Trish, is taking his talents across the country to compete in the upcoming Hershey’s Track and Field Games North American Final. The national track and field meet, set to be held on Saturday gives boys and girls, ages 9-14, the opportunity to learn and develop the skills required to participate in basic track and field events. “Brady was very surprised and excited to call everyone in the family and let them know the news,” Buxbaum’s mother, Trish, said. Twenty-five years ago, Buxbaum’s cousin Jessica competed in not just the very same track and field meet, but the same track event – the 100-meter dash.

“It’s a fabulous opportunity,” Jessica said of her younger cousin participating in the national event. “I’m so excited for him. It was a fantastic event.” Jessica finished seventh in the 100-meter dash when she was 14. She remembered her main challenge being the humidity and the heat – something she wasn’t used to racing in before the meet.

Brady participated in the Hershey’s Track and Field event held in Colstrip on June 11, where he competed in the 9-10 age division. He finished first in the 100-meter dash (14.30). By placing first in a state level event he qualified for regional placing which is done by taking all the top times/placers for each event and ranking them by times and distances. The area’s region is known as the pacific northwest and consists of all of Alaska, Washington, Oregon, Idaho, Montana, Alberta Canada, British Columbia Canada, Yukon and Northwest territories of Canada.

“This was a very unexpected call to receive for us,” Trish said. “We always knew there was a chance, but never thought it would happen the first time he tried. We are very proud and excited for him to experience this once-in-a-lifetime opportunity. We would like to thank all the family and friends who have supported, encouraged and helped make this possible for us as parents to be able to attend and watch him compete and grow in Pennsylvania.”