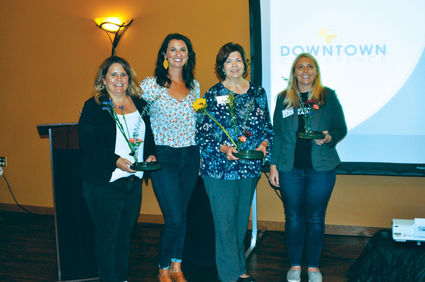 The North Dakota Downtown Conference recognized its inaugural Downtown Impact Award winners during its Awards Luncheon on Thursday, August 29, 2019 in Williston. The awards recognized organizations and individuals who have made outstanding contributions to the downtown districts in their communities.

The winner of the Downtown Atmosphere award was Helping Hettinger Day. The award honors a project that has improved the ambiance and quality of life in a downtown district. Helping Hettinger Day attracted more than 100 volunteers who built sidewalk benches, painted crosswalks, picked up trash and much more.

The winner of the Downtown Champion Award was Debbie Richter of Williston. The award recognizes a volunteer who is a valuable resource to their downtown district. Richter was honored for helping found the Williston Downtowners Association and its signature events like Summer Nights on Main and Crazy Days as well as playing an essential role in the group's marketing.

The winner of the Downtown Leadership award was Kate Herzog of Bismarck. The award honors an individual in a leadership role that has made a positive impact on their downtown district. Herzog is the Chief Operating Officer of the Bismarck Downtowners Association and President of the Downtown Bismarck Community Foundation. She spearheaded the effort to create North Dakota Downtowns and hosted the first five North Dakota Downtown Conferences.

The award winners were honored during the Awards Luncheon at the North Dakota Downtown Conference in Williston. Nearly 100 people from across North Dakota attended the conference. Attendees heard from four keynote speakers, attended two breakout sessions, networked at dining and social events and toured Downtown Williston.