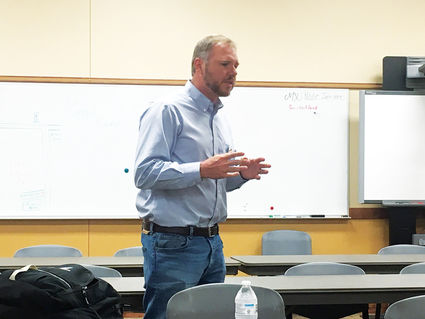 John Mues is running for the Montana U.S. senate seat against incumbent (R) Steve Daines. Sunday afternoon, August 25, Mr. Mues spoke in front of small group at the Extension building about his desire to replace Senator Daines in the upcoming elections. Mues and wife Claudia live near Loma. They are expecting their first child shortly. Muse, 45, said he has worked in the energy sector for 11 years as a senior engineer. He has a master's in business administration from the London Business School. John Mues also graduated from the U.S. Naval academy and trained as a submarine warfare officer and nuclear engineer. Mues participated in the Troops to Teachers Program and taught on the Fort Belknap Reservation at Hays/Lodge Pole for a number of years. He believes that his most important skill set is empathy.

Mues finds Senator Daines an "inadequate and destructive senator" representing Montana. Mues battles for this seat against Daines but also fellow Democrat Wilmot Collins who Mues refers to as "not a solid candidate." John spoke of the "need to have a functional government" and criticized Daines and Trump for the "politicization of public offices." Candidate Mues has several items on his agenda when he is elected to the U.S. Senate. "Job creation is at the top," says Mues. It should be noted that U.S. unemployment rates stood at 3.7% in July of this year. Montana's unemployment rate as of July this year was 3.4% according to the BLS current population survey. Along with increasing broadband in rural areas of the U.S. he would like to lower taxes on small to medium businesses while making sure the "economically elite" do not continue to widen economic gaps. Mr. Mues talked about the need for infrastructure policy as many basic structures are in dire need of repair or replacement. He would like to see more of the U.S., especially Montana, transition to a more clean energy economy. Though he has worked in the upstream oil & gas industry he believes that "climate change is real" and we should move into less traditional and more renewable options, like wind turbines. Mues believes that education is critical especially to increase the options and benefit of promoting trade and vocational schools. He also talked about the "trade wars" that are currently being done at the federal level. Although Mues believes that we do need to stand up to China on trade, he says that "there is a smart way and a dumb way and Trump is doing it in the dumb category." Another aspect he would like to address is national security and border security. Mues believes that the U.S. has 6 borders to protect; all four land accesses but also the space above us and virtual boarders. Cybercrimes against citizens and U.S. government are increasing.

Mues is traveling around the state and recently wrapped up some time in Miles City. While there he toured the community and talked with local officials about the levee and flood issues. Mues is scheduled for over 20 fundraisers during the campaign. Election Day is November 3, 2020. Be sure to check out each of the candidate's views on their respective websites: John Mues at muesformontana.com; Steve Daines at daines.senate.gov; Wilmot Collins at wilmotcollins.com.