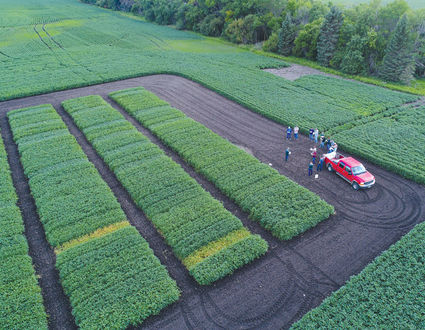 Dr. Kandel has worked as an extension agronomist in the region since 1995. He received his Master of Science degree from the University of Reading and his Ph.D. from NDSU. Kandel brings international experience to his position from his work with farming communities in developing countries as well as Europe.

Dr. Kandel has been performing research on successful soybean management for a little over 25 years! Recently, he and his students have been working on a statewide study. "We are working on a statewide study where at the end of the growing season, we ask farmers to provide us with their management and yields. We actually had some of our students go to some of the participating farmers to investigate their fields. The objective was to find out which of the management factors had the most likely chance of increasing yields."

Through Kandel's research, he has found that many factors contribute to successful soybean management, such as variety selection and adaptation, correct row spacing, planting date, and the proper use of inoculants.

Soybean variety selection should be based on maturity, seed quality, disease reaction, yield, and iron-deficiency chlorosis tolerance. Kandel explained that later-maturing varieties tend to yield more than early-maturing varieties. "Although late-maturity increases yield potential, these varieties will have more risk than earlier-maturing varieties," said Kandel. For example, an early fall frost could damage or kill a late-maturing variety before the beans have completely filled in the pods-which would result in decreased yield and quality of the crop.

Row spacing is also crucial for improving soybean yield. Kandel's research has proven that higher yields of soybean can be achieved in rows less than 30-inch spacing. NDSU research indicates that 14-22-inch rows out yield wider-spaced (28-30-inch) soybeans by an average of 4% when averaged across 24 trials.

Soybean seeding rate and planting date are also important factors to consider. Planting soybeans after the soil has warmed up to 50° F is favorable because soybeans are susceptible to frost and near-freezing conditions in the early spring and late fall. Planting early in cold/wet soil can result in low germination and an increased chance of seedling diseases. Planting during the first part of May is usually best because it reduces the chance of frost injury. 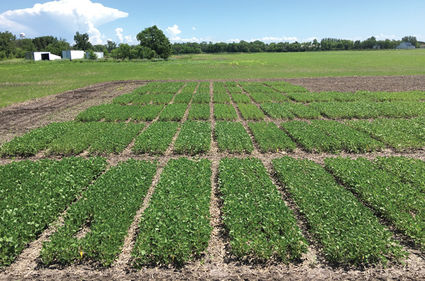 Granular tends to be the easiest for growers to work with. When using peat-based and liquid-based treatments, all seeds should have inoculum attached to it when it enters the soil. Peat-based inoculants can wear off the seeds if they are not applied with the appropriate amount of sticking agent. Application of liquids could be poorly calibrated, which may cause the inoculum to miss some of the seeds. Even granular can pose problems if the seeder is poorly calibrated. Kandel explained, "It is especially crucial for farmers in the western part of the state to inoculate soybeans when planting in new soil; otherwise, there will be no biological fixation of nitrogen."

If growers use proper care during handling and application, the success rate of inoculation is very high. If nodulation does not take place, more nitrogen will have to be applied to reach yield potential.

When Kandel was asked if there is anything new he would be implementing into his current research, he said, "We are looking at fertility issues and different types of inoculants. We keep on refining our management strategies as farmers are asking us questions."