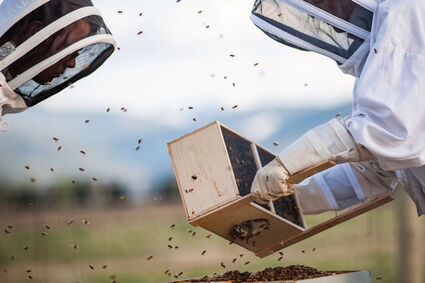 Bozeman - In an international collaborative effort, researchers at Montana State University co-discovered a virus that infects bees, including both native mining bees and honeybees. The new virus was named Andrena associated bee virus-1, or AnBV-1, since it was most prevalent in mining bees, part of the family Andrena.

Michelle Flenniken, Department of Plant Sciences and Plant Pathology associate professor in MSU's College of Agriculture, worked with researchers from Israel, who collected more than 1,300 bee specimens from 14 sites in the central part of that country. The two most abundant bee species collected were mining bees and honeybees.

"Most bee-associated viruses are known as 'honeybee viruses' in recognition of the host from which they were first discovered and described," write the authors of a paper, published February 12 in the journal Viruses, announcing the discovery. "Sequencing a greater variety of bee and other insect species indicates that many honeybee-infecting viruses have a broader host range that includes other bees, as well as other insects."

Mining bees, said Flenniken, can be found all over the world, including in the US. They are much smaller than honeybees or bumblebees and do not live in nests. Instead, they burrow in the ground, living alone or in small groups. They forage on a variety of flowering plants, whereas other species specialize on particular plants, like mustard or canola.

"It's not that surprising that we discovered a new virus, because bee virology is an under-explored area of research," said Flenniken, who co-discovered Lake Sinai virus 2, another bee-infecting virus, while doing postdoctoral research at the University of California San Francisco. "Viruses that affect bees have a wider host range than mammalian-infecting viruses, and this broader host range necessitates the study of multiple co-foraging bee species, because viruses can be transmitted between bee species via shared floral resources."

It is unclear what the impact of AnBV-1 is on bee health, but that is something Flenniken plans to study. In the meantime, she said, the new virus isn't cause for immediate concern. It is likely that insects have evolved alongside the virus, just as humans have the common cold. Like many bee-associated viruses, AnBV-1 doesn't have outwardly obvious symptoms and was identified through RNA sequencing of samples taken from the bees collected in Israel. One of the most important impacts of the newly identified virus, Flenniken said, is the opportunity it presents for further study.

"Knowledge about the impact of a virus, even at the cellular level, could help lead to strategies that help mitigate colony losses that are associated with viruses," she said. "Virus-host interactions are natural, common and prevalent, and most of the time a healthy host can clear a viral infection easily. It is important to do research aimed at understanding naturally evolved bee antiviral defense mechanisms, so that we can understand other stressors that perturb the bees' natural ability to fight off virus infections."

Prevalence and transmission of viruses like AnBV-1 could also potentially be lessened by land management strategies that enhance floral diversity, write the authors of the paper. The greater variety and abundance of flowers available for pollinators, the lower the chance that they will encounter a flower that was recently visited by an infected bee.

"That could be an important reason to promote ecological diversity and, by extension, help promote bee health," said Flenniken.

Now that the virus has been identified, members of the Pollinator Health Center, which includes research scientists across multiple disciplines as well as graduate and undergraduate students, plan to further study its impacts on bee health at the cellular and individual levels. In collaboration with Charles Carey, Pollinator Health Center bioinformatics specialist and associate member, Flenniken and her collaborators will examine bee genetic sequence archives and frozen bee specimens to see if AnBV-1 is present in bees from other locations, including Montana.

"Further study will be more at the individual bee level, which is both interesting and important," Flenniken said. "It helps us narrow a little bit the actual real-life effects of this new virus."