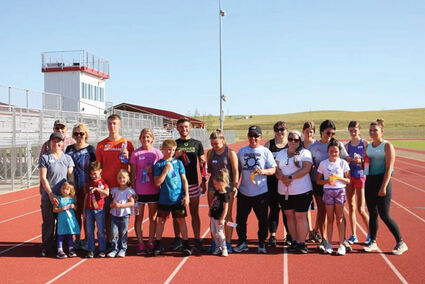 On July 3, Lambert had its 2021 All Class School Reunion at Lambert School. The event featured a banquet, cornhole tournament, reunion fun run, and decade rooms. The decade rooms featured several items from each decade of classes; rooms included annuals, old cheerleading uniforms, photos, and one room was playing a video of a basketball game warmup from 1955.

Since the 1970s Lambert has been hosting its All Class School Reunion, but more recently they have implemented a Lambert School Graduate Hall of Fame. This is the second time that the reunion has honored former graduates for distinguished careers and high-level accomplishments.

Fred Lake, Lambert Alumni Association President and 2021 All Class Reunion Committee Chairman, came up with the idea for the hall of fame. He said, "The goal is to recognize graduates and community leaders to inspire the kids coming up through the school system. We want to portray to the students that they come from a small school and are getting a really good foundational education and can accomplish great things."

Lake explained that this year's nominees' accomplishments were "very impressive". There were five individuals inducted into the hall of fame and two individuals selected as honorary alumni.

Larry Williams (class of 1956) is a Navy veteran, pilot, and performed 42 missions during the Vietnam conflict. He received his master's degree in business administration, taught accounting and business at Palomar College for 26 years and was instrumental in the formation of the Lambert Museum.

David A. Mullin (class of 1968) was active in athletics and community service; he was a big part of the District 2C Champions (1967), Conference Champions (1968), State Tournament Qualifier (1968), and college basketball at the University of Great Falls. He was also a coach and mentor for many years.

Ronald E. Pust (class of 1956) received his Doctor of Medicine at the University of Washington and attended University of Arizona, he established hospitals in Africa, and worked in Africa during the Ebola epidemic.

Robert J. Glodowski (class of 1963) is a world-renowned metallurgist in the steel industry, international expert on Vanadium, received a distinguished alumni award from South Dakota School of Mines and Tech. for outstanding contributions to engineering and science.

Honorary alumni included Buck Herman and Rial Wilson Cummings. Herman, successful entrepreneur, pursued a career in business with Pauper Industries, and is a large employer within the Lambert community. Cummings was a teacher and superintendent from 1922-1941.

Lambert School Graduate Hall of Fame inductees received a certificate and a frame with their picture and accomplishments are displayed at Lambert School.

Lake said, "We hope to continue recognizing people for their accomplishments and make sure that we get more involvement from the younger graduates."