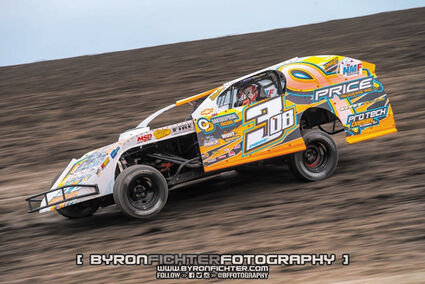 Dillon Price, Glendive, originally of Plentywood, has been racing circle track for the past eight years with his No. 308 race car; racing at several tracks throughout the area including Mandan, Dickinson, Williston, Estevan, Billings, Belgrade, and Great Falls.

He started in the IMCA Sport Mod class and moved up to racing IMCA A Modified two years ago, after being diagnosed with Leukemia. He said, "I've always wanted to race A-Mods so I just thought I'm going to move up just in case I won't be able to race in the future."

Despite having to do chemo treatments daily, he raced a full season of 25 nights with his A-Mod just to prove that he could do it and to show that his illness wouldn't be able to stop him from achieving his goals and pursuing his love of racing.

Price got started in the Sport Mod class with the help of Jody Kropp, Chad Johnson, and Jim Zaremski of Great Falls; all of who were very instrumental in kick starting Price's racing career.

Price would pit for them and help them work on their cars while living in Great Falls. When he moved back to Glendive, he decided to purchase a car of his own and start racing.

Since then, Kropp, Johnson, and Zaremski have been helping him with his car. He said, "Every year I go out to Great Falls and race with them for three days. They have helped me a lot and call me every single week just to check in on me, to see if I need any help with my car."

He has a small but mighty racing crew, consisting only of his wife, who has been at his side at every race. "She helps me with everything and that season we ran 25 nights, I about killed her off - she was about ready for me to be done racing," chuckled Price.

He explained that racing is tougher than a person thinks, especially with such a small crew. "Running a whole year of racing really takes a lot." He goes to work during the day and comes home to work on his car to get it race-ready and then does it all over again just to go race that same weekend.

Price said, "It is a lot of juggling, fast-paced, and hectic. The work just never stops, during the winter I strip the car down and put a new deck and body on it so that next year it is fresh and ready to race on the track."

One of the biggest challenges Price faces is sponsorship. Due to the fact that there are no local tracks in Glendive, he is unable to gain sponsorship. He said, "Everything costs a lot of money, which seems to be the biggest limiting factor nowadays."

Price loves the adrenal rush of racing and the competition. "The competition is what makes it fun because it is so steep; any night anyone can win. There is a ton of local talent that is super-fast."

His favorite part about racing is the community that comes with it. "I have received a lot of help from a lot of people, it is crazy, but it is kind of how circle track works. It's just a big family - if your down people help you out and even up in the high levels someone is always willing to help, whether that be with getting parts or fixing up your car."

When Price was sick, he said that the racing community was definitely the most concerned about it and wanted to make sure he was all right.

Price hopes to continue to make it to as many races as he can and hopefully race a late model in the future. He wants to travel a lot more next year and hit a lot more competitions. "I am hoping to stay as healthy as I can so that I can run as many nights as possible."