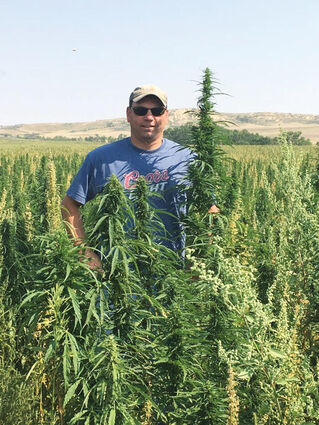 Bryan Provost stands in a field of hemp he grew. Provost was one of 25 plaintiffs involved in a lawsuit against a handful of companies that never paid for thousands of acres of hemp they agreed to buy from northeastern Montana farmers. (Credit: Courtesy of Ross Johnson)

The civil judgment, the second-highest ever awarded in Montana, highlights volatility and growing pains in the CBD market.

Hemp, a crop that largely flew under the radar in Montana when it was planted under a pilot program three years ago, is now central to one of the largest civil awards in the state's history. A jury in Wolf Point last month awarded 25 eastern Montana farmers $65 million in compensatory and punitive damages, finding that a handful of Canadian and American businessmen had committed negligence, fraud and deceit in failing to fulfill contracts, leaving the crops unpaid for and languishing in fields. The award brings into focus the volatility associated with the emerging market for CBD, a compound in the cannabis plant that's created a global market worth between $1 and $2 billion annually.

In 2018, hemp production in Montana was booming. As federal regulations around growing hemp loosened, dozens of Montana farmers saw an opportunity to diversify their operations with a crop that farmers in Canadian provinces to the north had grown successfully for decades. Montana farmers planted 22,000 acres of hemp in 2018, more than any other state at that time. But most of it was never used.

The vast majority of those acres were grown for a company called USA Biofuels, which entered into contracts with more than two dozen farms in northeastern Montana for 20,000 acres of hemp. Per those contracts, the farmers would be provided seed and paid $100 per acre at the time of planting. Come harvest, they would be paid another $400 per acre of hemp grown on dryland, and $600 per irrigated acre. The farmers liked the certainty presented by this arrangement. It would make them less beholden to the wild swings of the commodities market for crops like wheat, which was doing so poorly at the time it was hardly worth selling.

Early on, there were indications USA Biofuels wouldn't keep up its end of the deal. The company was late delivering the seed and issuing the initial payment. The farmers were repeatedly told the promised $100 per planted acre was coming soon. Then, six week later than expected, they received their initial payment - but not from USA Biofuels. Vitality Natural Health, LLC, a Canadian company, issued the payment instead. Montana farmers wouldn't see another check from either company.

Despite swathing and baling the product as directed, the farmers didn't receive the rest of the money promised to them by the contract. But USA Biofuels wouldn't let them sell it elsewhere, either, threatening legal action if the farmers tried.

Ross Johnson, Great Falls attorney, who represented 25 plaintiffs in a lawsuit against the AWOL purchasers and their Canadian and American executives, said USA Biofuels was a shell company without assets or a bank account, and that the businessmen involved in the deal were hoping to cash in on America's emerging market for CBD by securing a large supply of hemp and building out processing and distribution capabilities before taking the business public.

Some of the defendants named in the lawsuit stood to make hundreds of millions of dollars if the venture resulted in a successful IPO, Johnson said, but "the whole house of cards would have tumbled right off the bat if they let the farmers sell their crop [to someone else]."

So the crop sat, Johnson said, turning into a "rotting pile of biomass" that months earlier Vitality had valued at between $350-$400 million when applying for a commodity dealers license from the Montana Department of Agriculture. (Based on concerns about Vitality's ability to meet its contractual obligations, the department issued the company a conditional commodities license, which it didn't renew.) Though at least one of the farmers was able to secure another buyer for the product long after it was harvested - it was used in a kitty litter product - nearly three years on, many of the hemp bales grown for USA Biofuels are still in the fields where they were grown.

Beau Anderson, who farms in Bainville and just across the border in Williston, said the hemp he grew, more than 500 acres worth, is still sitting on his farm. Occasionally, he checks on the hemp bales to see how they're holding up, hoping they're still a viable product. He said he grew the hemp to supplement his other crops, including wheat, lentils, chickpeas, canola, corn and barley, because it "was something new, something exciting and something that was [supposed] to be profitable."

It didn't turn out that way. The three-year ordeal has generated "a lot of personal anguish," he said, and eaten up a significant amount of his time. Anderson said he's been especially frustrated with the defendants' poor business ethics, given that he was a point person who got many of his neighbors involved.

For a time, Anderson kept tabs on the various businesses involved. He heard about a Canadian company, Eureka 93, absorbing Vitality, which was the company the Montana Department of Agriculture, worked with most closely on the commodities license. He read about Eureka 93's IPO on the Canadian stock exchange, an effort that faltered shortly thereafter when the shares started crashing and the Ontario Securities Commission halted trading in September 2019. Anderson also read about the reshuffling of Eureka 93's executive team, which included the resignation of founding CEO Owen Kenney, one of the defendants named in the lawsuit.

"They're done," Anderson said. "As far as I know, the big company that was in Canada [Eureka 93] is bankrupt."

The attorney representing the defendants did not respond to requests for an interview for this story. An email sent to an address associated with Eureka 93 was returned as undeliverable, and calls to numbers associated with several of the companies named in the lawsuit and their key executives were not returned.

Anderson said he's hopeful the lawsuit's outcome sends a message that "you don't roll in and try to dupe a bunch of farmers [to grow] what could be a worthwhile commodity for the region without any money," but he knows there's still another hill to climb: collecting the money the jury awarded. He said he doesn't expect that any of the farmers will become millionaires out of the deal, but he'll be pleased if they're able to collect even 10% of what the jury awarded the 25 plaintiffs.

Given the number the jurors landed on after deliberating for 3 1/2 hours following the five-day trial that concluded June 25, Johnson said they appear to have been similarly troubled by the defendants' actions, awarding the plaintiffs $65 million to be paid by the various defendant businesses and individuals. Most of the award, $56 million, is for punitive damages, which are intended to penalize bad actors and discourage similar behavior in the future. The award is significantly more than the $1 million in punitive damages per defendant that Johnson asked for.

"[The defendants] were gambling with the farmers' livelihood, their land and their labor, for the shot that they might hit a big IPO. When it went south, they just tried to ride off into the sunset with the hope that nothing would happen to them, but the jury in Wolf Point didn't want that to happen," Johnson said.

Johnson added that, to his knowledge, the judgment is the second-largest jury award ever granted for a civil trial in Montana. (In 2014, a jury awarded nearly $250 million to the families of two teens killed in a car crash involving a Hyundai sports coupe.)

Johnson doesn't normally practice this type of law - he primarily works in personal injury law - but said he felt compelled to get involved when he heard about the farmers' plight in 2019 from personal connections in the agriculture industry.

"I grew up farming and ranching in north-central Montana, and I cannot tell you how unnerving it is just to imagine that people would consider being this deceptive and fraudulent when doing business with others," he said. "I had a soft spot for the farmers."

Though the business side of the undertaking left a sour taste in the mouths of the farmers involved, Anderson said the crop actually grew pretty well. It tolerated eastern Montana's temperamental weather and grew several feet high. He produced between 1,000 and 3,000 pounds of hemp biomass (including the plant's stem, seed head and flower) per acre.

Had the deal progressed as planned, the hemp would have been processed for CBD, or cannabidiol, which is a key ingredient in products marketed to treat a number of health conditions ranging from epilepsy and anxiety to pain and insomnia. (Hemp and marijuana are both types of the cannabis sativa plant, but marijuana has a much higher concentration of the psychoactive compound Tetrahydrocannabinol, or THC, than hemp. The Montana Department of Agriculture oversees the production of hemp, which is mandated to contain less than 0.3% total THC. Production of the recently voter-approved adult-use marijuana, which typically has a THC concentration ranging from 15 to 25%, will be overseen by the state Department of Revenue, said Andy Gray, Montana agriculture department's hemp program coordinator.)

Gray said some varieties of hemp are very well suited to Montana's climate, particularly hemp that's grown for fiber or grain. Varieties grown for CBD are a bit more finicky, he said, and tend to grow better indoors than outside, where they're subject to the elements.

Gray said the potential applications of hemp are vast. "It can be used for everything and anything from car doors to speakers to clothing to bioplastic," he said. Varieties grown for grain find their way into protein powders, granola bars and milk substitutes.

Gray said hemp grown for CBD became ensnared in a "get rich quick" rush that has since started to level out, both statewide and nationally.

Markets factored heavily into the arguments posed by the defendants in their trial brief. Mark Parker, Billings-based attorney for several of the defendants, argued that the businessmen's dealings weren't representative of fraudulent or deceptive business practices so much as a reflection of the boom-and-bust economic cycles that have been associated with everything from the fur trade and copper mining to oil extraction and heirloom grain varieties. The brief also hints that the plaintiffs' unfamiliarity with CBD oil production contributed to the outcome.

Without a doubt, most of [the farmers] signed contracts for money," the brief reads. "When it came time to go back into the market and sell the commodity, the market had so profoundly collapsed, there was no money to honor the commitments. Thus, about everyone began blaming each other for the collapse, but the cause is clear - it is part of the human condition."

That argument doesn't hold much water with Johnson, who laughed when, asked if he thinks there's merit to it. "That's why the farmers entered into the contract in the first place, so they wouldn't have to endure boom and bust cycles," he said. "It was a set price for them."

By the time the eastern Montana farmers were able to seek other buyers for their product without fear of legal retribution from USA Biofuels, it had been sitting out in the elements for several seasons, and supply was starting to catch up to demand. 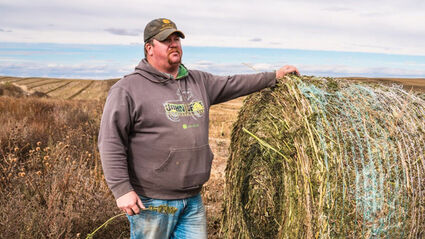 Lawsuit plaintiff Beau Anderson said he's hopeful the $65 million judgment sends a message that "you don't roll in and try to dupe a bunch of farmers [to grow] what could be a worthwhile commodity for the region without any money." Anderson said the hemp he grew for USA Biofuels is still baled in his fields. (Credit: Alexis Bonogofsky)

Gray said hemp production in Montana has seen plenty of fluctuations in the last three or four years, but he still thinks there's a path forward for farmers who want to grow the crop. "We see a future for hemp in Montana, primarily in the grain and fiber segment [of the market.]"