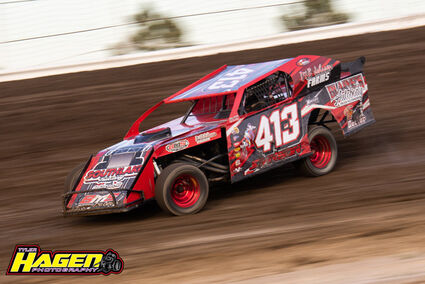 Johnson speeds down the track (photo by Tyler Hagen Photography).

Tate Johnson, Homestead, MT races the No. 413 race car in the IMCA Northern SportMod class. His race car number represents Philippians 4:13, "I can do all things through Christ which strengthens me."

Johnson kick-started his racing career in 2016 in the IMCA Hobby Stock class and so after moving to Arizona, he transferred to Pure Stocks.

"I moved down to Arizona for a bit, and they didn't have the Hobby Stock class, so I started racing Pure Stock for 2-3 years," said Johnson.

Soon after that he started racing Sport Mods and has so far been racing fulltime in that class for the past four years.

Johnson dedicates his time to several things including college, farming, and his fiancé. He just graduated from a diesel technician program and is continuing his education for auto body; and will be getting married in October.

Despite all of these things, he still manages to dedicate most of his free time to working on his car and racing.

He said, "I spent most of my high school life working on cars and almost every Saturday at that track with my friends and family."

His dad, Brad Johnson, has raced his whole life, mostly mud racing, and his dad's friend, Blaine Bjella, got both of them into circle track.

Since Johnson's start in racing, he has raced on several tracks throughout the country including tracks in North Dakota, Wisconsin, Arizona, Tennessee, Nevada, and even Canada.

He said, "I love traveling to different places - in March we went to Bristol, TN and that was the best thing I have ever done with racing because I got to race on a NASCAR track. I also try to hit the Las Vegas race every year- that one is a must; we always have an awesome time there!"

This year, Johnson has averaged in the top five for every race he has competed in. He notes his biggest accomplishment is being able to beat some of the racers that he idolized growing up. He added, "Some of the racers I looked up to and learned a lot from are now my rivals."

Johnson is thankful for all the support from his sponsors, family, and friends. He said, "I couldn't do it without the support of my parents Brad and Chanel Johnson and my fiancé, Kayla Brooks."