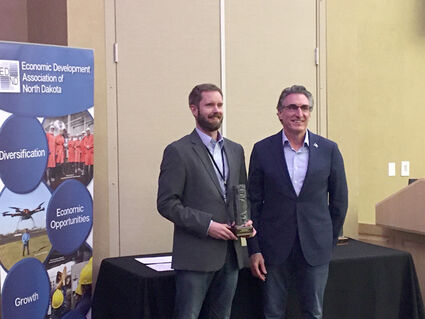 EDND Board President Shawn Wenko and Governor Burgum presented the awards, which honor economic development professionals, organizations and projects making a significant impact on communities and regions in North Dakota.

This award recognizes individuals who have made a significant contribution that will leave a lasting impact on the economic health of his/her community or region, thus increasing the quality of life for residents.

The Project of the Year Awards were presented to the following: Urban – Grand Forks Region EDC and Minnetonka Power Cooperative for Core Scientific and Rural - Traill County EDC for the Natural Gas Project.

This award recognizes a project that has made a significant contribution to the economic health of the community or region in terms of job creation, partnerships and overall economic impact.

The Program/Promotion of the Year Awards was presented to the McKenzie County JDA Housing Development Subsidy Program. Accepting the award was Daniel Stenberg, Watford City.

The award recognizes a program/promotion that has made a significant contribution to the economic health or quality of life of a community or region.

The Community Development Awards were presented to the following: Rural - Adams County for The Rural Collective and Urban -City of West Fargo/EPIC Companies for Essentia Health Plaza at the Lights.

This award is given for a development project that increases quality of life or otherwise brings about positive impacts in a community.

In other action at the EDND Fall Conference, Wenko was thanked for his two years as president of the organization and Teran Doerr of Bowman was elected as incoming president.