Know Signs Of EHD In Livestock

Insect vector transmitted diseases can cause severe disease in wildlife and in some instances domestic livestock. 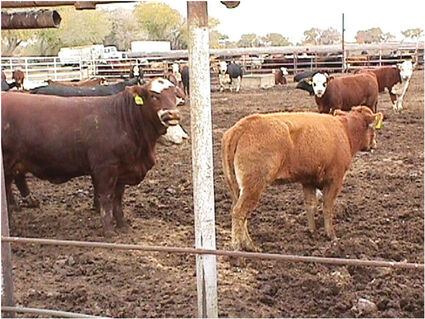 Insect vector transmitted diseases can cause severe disease in wildlife and in some instances domestic livestock. (NDSU photo)

Insect vector transmitted diseases can cause severe disease in wildlife and in some instances domestic livestock.

"Two notable infectious diseases transmitted by biting and or sucking insects are Bluetongue and Epizootic Hemorrhagic Disease or EHD," says Gerald Stokka, NDSU Extension veterinarian and livestock stewardship specialist. "The virus that causes EHD is closely related to the Bluetongue virus and is transmitted via insects belonging to the Culicoides species of midges, also known as no-see-ums."

"In North Dakota, EHD is a reportable disease," says Stokka. "We encourage hunters and livestock producers to be on the lookout for deer and livestock exhibiting symptoms."

EHD can cause severe disease in wildlife, particularly white tail deer, with less susceptibility in mule deer and pronghorn antelope.

Signs of the disease in deer include: high fever, lack of appetite, respiratory distress and edema of the head and neck. There is congestion of the mucosal surfaces of the mouth along with ulcers and erosions of the tongue, palate, rumen and abomasum.

The incubation period (time from exposure or infection to clinical disease) is thought to be from five to 10 days, and animals may die within two days of initial clinical signs.

Mortality rate of the acute form is high, although a chronic form also occurs in which recovery may take several weeks. The disease is endemic in the deer population, meaning there are carrier animals and when the insect vector is present, the virus will be transmitted to susceptible animals.

EHD in cattle is primarily non-clinical, meaning that the animal is infected but does not show clinical signs of illness. In severe cases however, similar clinical signs found in wildlife may be present in cattle.

Cattle may be lame and off feed with excess salivation due primarily to erosions and ulcers in the mouth, accompanied with cracking of the skin of the muzzle.

Cases also have been reported in elk and bison but rarely in sheep. Currently, goats do not appear to be susceptible, says Stokka.

Other disease considerations that may be similar in clinical presentations are bluetongue, vesicular stomatitis, malignant catarrhal fever, and foot and mouth disease. This is the reason oral symptoms and signs are considered significant in diagnosing this disease.

Though the EHD virus is not a risk to human health, as there is no evidence that the EHD virus infects humans, under no circumstances should deer exhibiting signs of illness be harvested for consumption, warns Stokka.

A blood sample is needed to test for bluetongue virus or EHD. For details about submitting a sample, visit NDSU's Veterinary Diagnostic Lab website at https://www.vdl.ndsu.edu/tests/bluetongue-virus-epizootic-hemorrhagic-disease-pcr/.