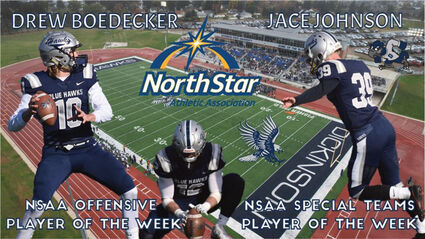 Boedecker was near perfect in passing completions, recording an astounding 93.3 completion rate in fueling No. 20 Dickinson State to their seventh straight North Star Athletic Association football regular-season title after a 41-17 road victory at Presentation. He completed 14 passes in 15 attempts and threw 224 yards with four touchdown passes. Boedecker also registered a pass efficiency of 306.8 in the game. He averaged nearly 15 yards per pass.

No. 20 Dickinson State wrapped up the North Star Athletic Association football regular-season outright title, their seventh straight league title, after rolling to a 41-17 road victory at Presentation. The Saints grabbed its first lead of the game 3-0 in the early first quarter. The Blue Hawks then exploded for 34 points for the rest of the first quarter, grabbing a 34-7 lead. DSU extended their lead to 41-3 in the early third quarter and never trailed in the game. Dickinson State recorded 336 total offensive yards compared to Presentation 242 total offensive yards. The Saints had three interceptions in the game, while the Blue Hawks had one interception. Dickinson State won their seventh straight game to raise their overall record to 7-2 and 7-0 record in the North Star contests. Presentation fell to 0-10 overall record and 0-7 NSAA conference record.