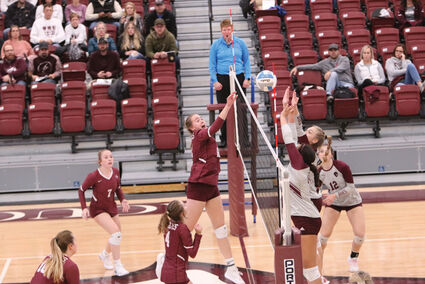 Watford City's Madison Spacher drives a spike past Bismarck's blockers in the quarter finals of the WDA Regional Volleyball tournament in Watford City over the weekend. The Lady Wolves were defeated by the Bismarck Demons 0-3 in the quarter finals on Thursday and also fell to Mandan 1-3 to end their season on Friday. Bismarck Century Patriots claimed the title on Saturday 3-0 against Bismarck Demons. (Photo by Kathy Taylor)