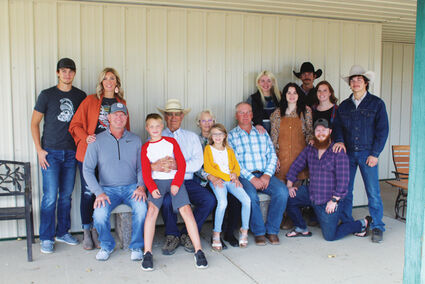 Tom and Renee Nelson and their family operate the ranch. The place was originally homesteaded by Tom's great grandparents in 1909 and has remained in the family since then.

Nelson Livestock raises Simmental, SimAngus, and Angus cattle. They started raising Simmental cattle in 1971 and sold their first set of bulls in 1974.

"We added purebred Angus to our herd in the mid-1990s and now have an established herd of SimAngus cattle. They are very versatile and popular, an ideal cross with many desirable traits," explained Tom.

According to Tom, using a crossbred cow will give you 30% more lifetime production and crossbreeding utilizing heterosis is the only "free lunch" in the cattle industry.

With Nelson Livestock Co.'s cattle, you can expect maintenance-free genetics.

"We try and select cattle that work for the commercial man. We don't creep feed; our rugged forage-based operation is designed to be as close to the conditions of our primary customers as we can make them. They are environmentally tested black and red SimAngus and Simmental genetics for no-miss crossbreeding solutions; selected to thrive without extra inputs, and produce," added Tom.

Over the years they have sold cattle, semen and embryos into 30 different states and into different countries including Australia, Canada, and Mexico.