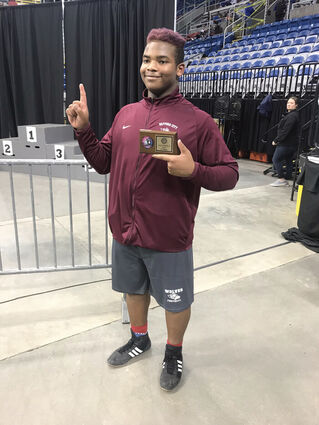 Nivon Hayes, Watford City High School, captured the North Dakota High School Wrestling Association's heavyweight title at the Fargodome. This was the first time the Wolves have had a champion since joining Class A.

Hayes is a junior at Watford City High School in his second year of wrestling. Last year, he was only able to win two matches, but he stays in shape throwing the discus in track and playing football for the Wolves.

He came into the tournament with a 23-12 ranking. He first pinned Fargo South's Cayden Nielson in 3:11 in his first match. He went on to pin Jamestown's Dalton Darby in 2:43. to move into the quarterfinals. He next secured a pin against Breckenridge/Wahpeton's Jackson Burchell in 1:02 to advance to the championship round where he met Fargo Davies's Dylan Carlquist with a record of 43-4, but because of his conditioning with his three coaches he was able to turn Carlquist's 9-2 advantage to out wrestle him into a pin in 3:36 for the championship.