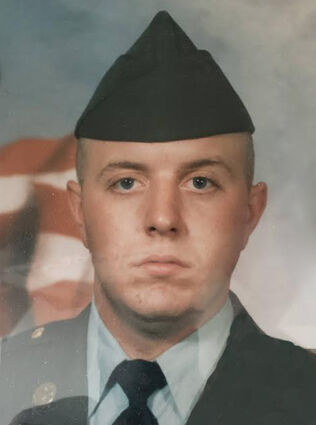 Nathan Richard Meyers was born on January 22, 1981 in Lapeer Michigan passed away unexpectedly on March 9, 2022 in Watford City, North Dakota.  He was the firstborn son of Thomas K. and Janice E. (Hall) Meyers.

Nathan is survived by his wife, Amanda; three children, Emily (12), Ivan (7), Breanna (5); father, Thomas Meyers; brother, Michael Meyers and his wife Christina, of Croswell, MI as well as one brother-in-law and two sisters-in-law. He was an uncle to 11 nieces and nephews.

He was preceded in death by his mother, Janice; uncle, Clint Meyers and Robert Meyers; aunt, Jeanne Harrison and grandparents.

Nathan proudly served his country as an artilleryman in the U.S. Army and completed two tours of duty in Operation Iraqi Freedom 2002-2003. He was a devoted father and a beloved part of many lifelong friends and extended family.

Nathan's Memorial Service will be held Saturday, March 19, 2022 at 12:00 pm at the Cross Point Church in Watford City, ND. Pastor Shaun Breiland will be officiating. Fulkerson Stevenson Funeral Home of Watford City, ND is assisting the family. Condolences may be left on our funeral home website at http://www.fulkersons.com.

The Memorial Service will be live streamed, you can view Nathan's service directly on his obituary page on our website http://www.fulkersons.com