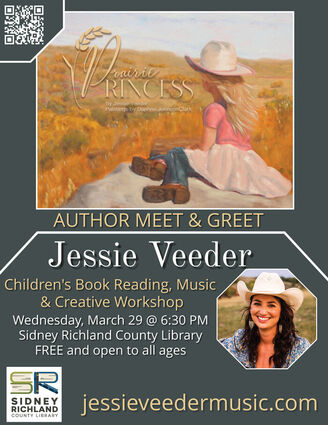 "Prairie Princess" is a celebration of rural living and our connection to the land told through the perspective of a young girl inspired by Jessie's magical childhood on her family's ranch in w North Dakota, "Prairie Princess" lets a little girl be the expert tour guide and caretaker of the land that she knows so well and reminds us what it's like to be captivated and responsible for a place.

As part of the program Veeder will share some music, read the book, and discuss the inspiration, creative and publishing process. She will then conduct a fun and engaging creative workshop that encourages guests to explore and pay homage to the place they love most.

Attendees will leave inspired, connected and with a piece of art to be proud of.

The book will be available for purchase at the event.

Veeder is a state-wide columnist and has been a symbol of folk music in western North Dakota since releasing her first album when she was only 16. Since then, she has continued a successful music and creative writing career. Jessie's 2015 album, "Northern Lights", brought her to Nashville to record with Bill Warner, a producer who has worked with artists such as Garth Brooks, Dolly Parton, and many others. Jessie's skill as a songwriter and storyteller soars in songs that remain rooted in the stories of her western North Dakota home. Jessie works alongside her husband and father as the fourth generation Veeder Ranch in McKenzie County. She is the mother of two young daughters, who helped inspire Prairie Princess. Her weekly writing can be found on www.veederranch.com. For more information on Jessie Veeder's work visit www.jessieveedermusic.com

Johnson-Clark was raised in rural North Dakota near the Montana border, where she spent much of her childhood at her grandparents' ranch; chasing cows, building fences, milking cows and helping check for spring calves. In 2019, Johnson-Clark completed her Master's in Fine Art from the Academy of Art University. It was a natural fit to bring together her background and love for ranching and the outdoors into her paintings. Johnson-Clark believes there is a story in these rural areas just waiting to be told and she wants to help tell that story. For more information on her work visit www.daphneclarkart.com

For more information about the event contact the Sidney-Richland County Library, 406-433-1917.