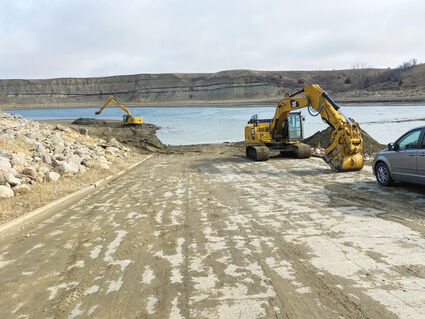 The U.S. Army Corps of Engineers, Omaha District announced that based on current runoff conditions in the Missouri River Basin, including the lack of plains snowpack, below-average mountain snowpack, and dry upper basin conditions, it has moved forward with plans to facilitate access to Lake Sakakawea.

District personnel began working last year to address the anticipated impacts to recreation around the lake. Measures taken include issuance of a Regional General Regulatory Permit to help expedite regulatory requirements for anticipated work. Last November, Garrison Project personnel surveyed numerous boat ramps expected to be impacted by the lower-than-average forecast and developed site-specific cost estimates for needed repairs to maintain access. Requests for funding were submitted based upon those estimates.

"While challenges with federal budgets have impacted moving forward on some projects, the good news is that much of the infrastructure installed during the drought of the early 2000's remains in place, so USACE and its recreation partners are capitalizing on that work and doing everything they can to ensure the public has access to Lake Sakakawea," Todd Lindquist, Garrison Project operations project Manager, said. "Currently, low water concrete ramps are generally in good condition but the access roads and parking lots for these ramps require reconstruction due to erosion from years of higher water levels."

District personnel are currently assisting concessionaires around the lake with submission of their regulatory permit applications and providing engineering support on measures needed to maintain boat access.

On March 28, USACE began removing sediment at Government Bay while the reservoir still had solid ice cover and expects to have that, and three other ramps owned and operated by USACE, functional for the beginning of the recreation season. Following completion of Government Bay, work will then begin at the Deepwater Creek low water ramp, which will include access road and parking area improvements and sediment removal. Similar work will be performed at Douglas Bay and Wolf Creek.

The Corps of Engineers would like to express its appreciation to the many concessionaires and agencies who own and operate recreation facilities around the reservoir who are also pro-actively moving forward with plans to maintain and improve access at main boat ramps, as well as low water ramps where needed. Lindquist says "Despite challenges associated with drought in the basin, reservoir levels are forecast to be more than over 20 feet higher than the record low elevation experienced during the drought of the early 2000's so people can still expect to be able to access this beautiful reservoir, and he expects fishing to be good.

Lindquist also wants to remind boaters the importance of protecting this resource and let them know that the Corps of Engineers, in partnership with the North Dakota Game & Fish Department and concessionaires around the reservoir, will be making a concerted effort this year to educate boaters on aquatic nuisance species and the steps they can take to help protect the pristine waters of Lake Sakakawea.

Additional information regarding lake access can be found at: https://www.nwd-mr.usace.army.mil/rcc/information.html.