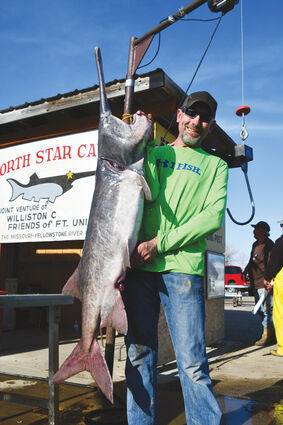 John Waldrop, Moorecroft, WY, poses with his paddlefish at the Confluence on May 4.

The North Dakota Game and Fish Department announced May 9 that the state's 2022 paddlefish snagging season is closed to any additional harvest to provide long-term protection of the paddlefish population.

paddlefish snagging is allowed only from 7 a.m. - 9 p.m. CT during each day of the additional seven-day season. The use or possession of a gaff on snag-and-release days is illegal.