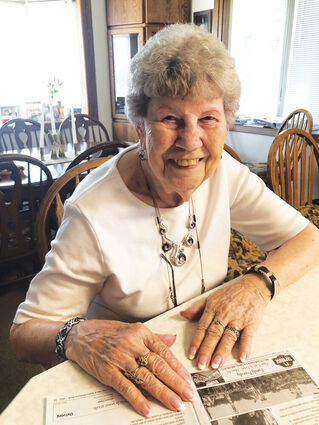 Binder began her fair adventure in the arts and crafts department in 1993. After spending two years in that department she moved to the amateur photography department. Until 2019, the department was in the ag building but has now moved to the old commercial building.

"I have six good helpers." They have to be 14 years old or older but I prefer the younger ones to get them interested in photography," she says with a smile.

There are 23 categories this year that sometimes change from year to year.

Tables are set up with five categories to a table and two judges are chosen by the extension office to judge each category. Entries are accepted on Monday nights from 6-8 p.m., Tuesday from 7-11 a.m. and judging begins at 1 p.m. until done or at 8 pm. There are ribbons given out plus best of show awards for each category. An overall best of show is also awarded.

"Any recognition I can give to somebody I do", she states. The division of 17 and under are given a camera. Their job is to take a photo of the last year's fair to enter in one of the 23 categories. They have to be in the picture to enter in the next year's fair. Blue, red and white ribbons are given out for the entries.

"I like working with the young people because something I do might help them in the future. I love pictures of people because people change every day."

A special thanks to our sponsors: 710 Auto, Thrifty White Drug, ElectricLand and Ribbon and Rail, Sidney.