200-Light Drone Show To Take To The Skies Aug. 14 In Williston 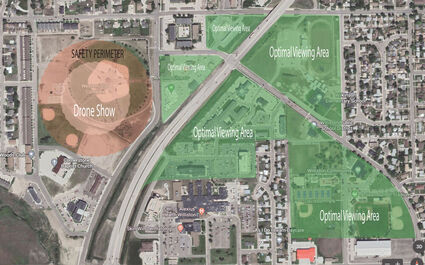 "Our partnership with the Babe Ruth World Series shows how the community of Williston can come together to make these special events happen," said TrainND Northwest Executive Director Kenley Nebeker.

The show will consist of 200 synchronized drones choreographed to music by Firefly Drone Shows. The computer-controlled drones will be stationed at the Western Star Softball Complex. Optimal viewing will be approximately 1,500 feet from the Western Star. People will not be allowed in the complex during the show due to Federal Aviation Administration (FAA) regulations.

"The FAA has strict guidelines requiring ground clearance for Unmanned Aerial Systems (UAS) operations," explained Williston Economic Development Executive Director Shawn Wenko. "We advise our residents and visitors to please adhere to the safety perimeter that will be established at Western Star."

The best viewing sites will be within a 1,500-foot radius of the Western Star Softball Complex.

"Optimal public viewing will be Davidson Park, Aafedt Stadium, Cutting Field and Wilkinson Elementary School," said Wenko. "We kindly ask the pubic not to stop in roadways or stand near intersections or areas of traffic that may pose the risk of an automobile/pedestrian accident."

"With UAS being such an emerging technology up here, and the Babe Ruth World Series Event, which attracts teams from all over the United States, it's a great way to showcase what that technology can do up here," said Wenko.