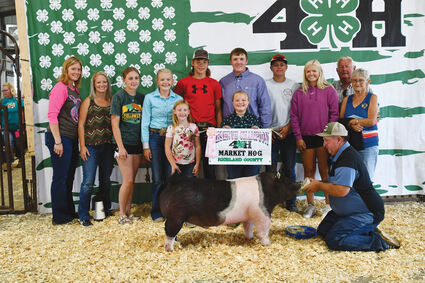 On top of this, their cousin Avery Johnson was awarded the Grand Champion Jr. Hog Showman and won the Jr. Round Robin.

"We got our hopes up this year. We had a set of pigs that we knew were pretty good and the goat was one I raised myself, so it was nice seeing it do that well," Cooper said. "It feels pretty awesome to have such a successful fair."

Cooper works hard towards achieving his goals and 'making the best better'. "You have to go into it with a goal and if you don't achieve that goal, you can't give up on it because there is always next year, which means that there is always more work that can be done."

This past year, there were several challenges that made things difficult explained Cooper. "We have had plenty of challenges, as far as the blizzards earlier in the year. We had to have pigs back on the trailer and we got the steers later than I expected, but the success we had at the fair really built back from everything that went wrong in the beginning of the year."

The McNally's had 13 pigs in the barn and 3 steers that they worked with almost every day. "As a family, we definitely put in a lot of hours into these projects." 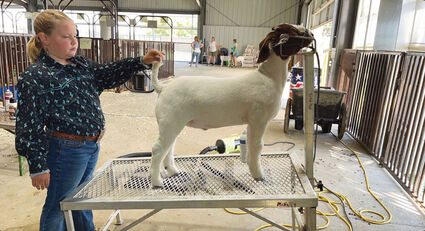 Brynlee McNally and her goat.

"I love working with my sisters. My favorite part about raising livestock is that my whole family is involved in it. It has been really cool watching my sisters grow up into it and enjoy it."

For the past nine years, he has shown animals at the county fair, attended clinics, and competed in jackpots and several livestock shows. "Our goal is to always have quality animals that are hard to get around. We are just hoping to hang up as many banners as we can."