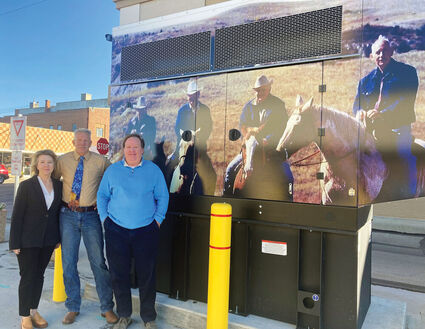 Pictured with the wrapped generator are children of 3 of the 4 men pictured on horseback: Tammy (Davidson) Sogard, daughter of Tom Davidson, Sr; Lance Olson, son of Leon Olson; and, Pete Furuseth, son of Norm Furuseth. Although not available for the picture, Dr. Bill Strinden, son of Dr. Dean Strinden, said of his father being in the picture, "He would be so pleased to be pictured with his 3 good friends."

Recently, American State Bank & Trust Company, Williston installed a generator at its main bank on Main Street in Williston. With the large gray structure in place, current ASB&T owners and Board Members, Pat and Tammy (Davidson) Sogard, saw a blank canvas and took the opportunity to honor some community leaders from Williston's past and beautify an otherwise dull structure.

A classic photo of four longtime Williston friends on horseback in the grasslands of western North Dakota was turned into a vinyl wrap to cover the generator. Pictured on the wrap are former ASB&T owner and father of Tammy (Davidson) Sogard, Tom Davidson, Sr .; longtime Williston Public School Superintendent Leon Olson; Williston educator Norm Furuseth-who is also the father-in-law of ASB&T Board Member Laurie Furuseth; and, Dr. Dean Strinden, a longtime, highly respected family doctor in Williston. These four friends met daily for coffee in the Bank's employee breakroom for many years. While they have all passed away, they all left their mark on the community. The photo was taken in the mid-1980s.

The significance of the photo as part of ASB&T's history symbolizes the Bank providing services to local farmers and ranchers since 1906, and the Davidson family's ranch being in existence since 1908. Banking and ranching have been important components of the Davidson-Sogard family for more than 115 years. The men in the photo were strong supporters of western North Dakota and eastern Montana, who enjoyed each other's company in the ranch setting as well as in a professional setting.