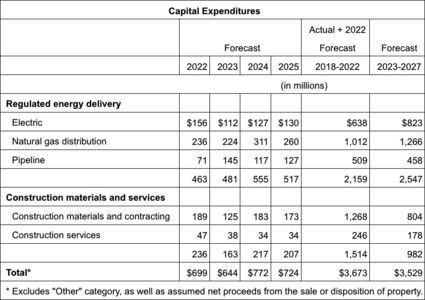 "Our capital investment plan includes a number of key projects that are expected to provide organic growth across our businesses, with particular emphasis on upgrades and expansions to our electric transmission and distribution infrastructure and our natural gas transportation and distribution systems," said David L. Goodin, MDU Resources president and CEO . "These capital investments encompass all our businesses while we continue to make progress toward our strategic initiatives of creating two pure-play public companies."

On Aug. 4, the company announced its intent to separate Knife River Corporation, which is expected to be effected as a tax-free spinoff to MDU Resources shareholders. In addition, on Nov. 3, the company announced a strategic review process for MDU Construction Services Group, Inc. The company plans to provide a progress update in mid-December on its strategic initiatives.

MDU Resources plans to make substantial investments in its utility operations with a 27% increase in capital expenditures compared to the previous five years. The company anticipates its electric and natural gas utilities will grow rate base by approximately 6-7% annually over the next five years on a compound basis. Customer growth is expected to continue at a rate of 1-2% annually across the company's eight-state service territory.

The outlined capital investment plan includes meeting service needs related to customer growth as well as replacing, expanding and modernizing infrastructure within the electric and natural gas distribution systems. These infrastructure investments will provide enhanced reliability and safety across the company's systems, in addition to serving a growing customer base. The plan includes construction of transmission and substations, power production upgrades and improvements, and the recently announced Jamestown-to-Ellendale 345-kilovolt transmission project in North Dakota, which is estimated to cost $439 million and of which the company expects to invest 50% or $220 million, recovered through a MISO rate.

Capital expenditures at MDU Construction Services Group, the construction services business, will be focused primarily on normal equipment replacements and upgrades. The company also expects public sector workload growth for this business from the Infrastructure Investment and Jobs Act and Inflation Reduction Act.

The capital program is subject to continued review and modification by the company. Actual expenditures may vary from the estimates due to changes in load growth, regulatory decisions and other factors. Acquisitions would be incremental to the company's 2023 to 2027 outlined capital investment plan. The company will provide updates as it identifies opportunities outside the plan.