Badlands Search & Rescue Is Training Bloodhounds To Add To Their Team 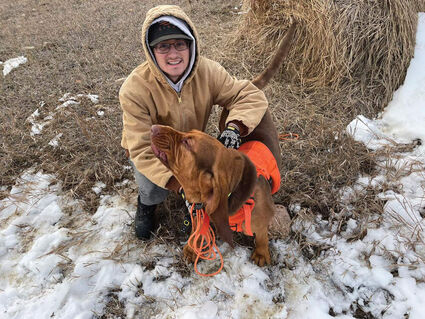 In 2022, Badlands Search and Rescue has been pleased to add two new members to their team. K9s Copper and Daisy Mae are two purebred bloodhounds that were purchased, and are being trained by two different members of BSAR to be used for scent and man trailing.

Copper was purchased in April 2022 from K4 Bloodhounds, Miles City, by Matthew Earl. The breeder uses Copper's dam for blood trailing and several of their pups have been purchased for that reason, but Copper is the first of the breeder's pups to be purchased for man-trailing. Matthew has been with BSAR since 2020. He is experienced with dogs even though Copper is his first bloodhound. Training with Copper is the first time he has trained a dog for man trailing.

Daisy Mae was purchased in March 2022 from McCollam Bloodhounds, Byron, WY by James Earl, Matthew's father. Many of McCollam's Bloodhounds dogs have gone to homes to be SAR dogs and in police work. Two of her littermates went to Salt Lake City Utah's police department for scent trailing and man trailing. James, as of December 2022 has only been officially part of BSAR for 6-7 months, however, he has helped with activities in the past. He has had experience with basset hounds before but Daisy is his first bloodhound and also, the first dog he has trained for man trailing.

Even though Copper and Daisy are members of their respective owner's families, they were both purchased to add their abilities to the BSAR team. James Earl said, "During the Katelynn Berry case we saw that man-trailing dog services were severely lacking in the area. Katelynn was just a few feet from her home and no one in the area had the resources to find her." Matthew Earl said, "If someone had used a bloodhound, they would have found her a lot sooner. It would have meant quicker closure for the family." The dogs are being trained with the assistance of a bloodhound trainer from North Dakota, and they are looking to get them certified in the spring of 2023. Badlands Search and Rescue was not able to participate in the search for Katelynn Berry.